Obliterated by the bombing, a neighborhood is reborn 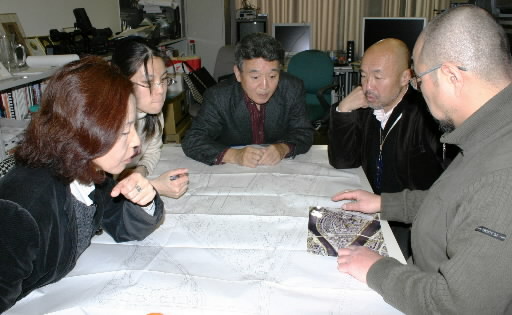 The Nakajima district, a neighborhood demolished by the atomic bombing, was once located in the area now occupied by Hiroshima Peace Memorial Park. Masaaki Tanabe, 70, president of a computer graphics company, is leading an effort, with the assistance of former residents of the Nakajima district, to restore the appearance of the neighborhood through the use of computer animation. Mr. Tanabe, an atomic bomb survivor, completed a similar film project in 2002 to depict his own fallen neighborhood known as Sarugaku-cho.

On December 14, members of the project held their first committee meeting at Hiroshima City University and expressed the hope of completing the film by 2010. Besides Mr. Tanabe, other participants gathering for the initial meeting included Takeaki Nakajima, a professor of computer graphics at Hiroshima City University, Yumiko Fukuda, a professor of architectural engineering at the Hiroshima Institute of Technology, and Yoshihiko Takesaki, a cartography researcher. They discussed how a map of the area before the bombing could be brought to life through visual imagery to show the Nakajima district as the bustling neighborhood it once was.

The first step of the project involved creating a map of the area using aerial photographs taken by the United States right before the bomb was dropped as well as testimonies from former residents. With this map as the basis for their work, the group discussed the technical approaches needed, such as the use of GPS, to accurately locate the positions of buildings and other objects that had disappeared as a result of the bombing.

In 2008, the project will proceed with activities that include shooting interviews of atomic bomb survivors who lived in the neighborhood and producing an hour-long documentary. Mr. Tanabe remarked, “I hope to make a documentary that will receive international attention. People should be aware of the fact that in Peace Memorial Park, which attracts many visitors, a large number of people once lived and died.”
ツイート
Return