Atomic Bomb Exhibitions held nationwide in the U.S. Exhibitions in 101 cities in run-up to the U.S. presidential race 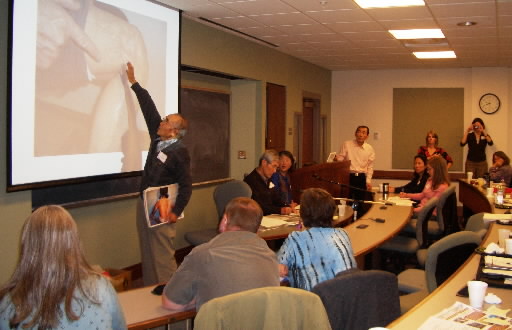 The Hiroshima Peace Culture Foundation, which administers Hiroshima Peace Memorial Museum, has been holding Atomic Bomb Exhibitions nationwide in the United States since the autumn of 2007 with the aim of swaying public opinion towards the abolition of nuclear weapons in the run-up to the U.S. presidential election. In collaboration with local citizens’ groups, exhibitions have so far been held in six cities, including Rochester, New York and New Haven, Connecticut, and hopes are high to involve a total of 101 cities by the end of 2008－two cities in each of the 50 states plus Washington D.C. At this time, besides the six cities that have already taken part, 30 other cities have been confirmed.

Emiko Okada, 71, Susumu Yoneda, 67, and Yukio Yoshioka, 78, are atomic bomb survivors who shared their experiences at exhibitions in the United States. After returning to Hiroshima, they held a press conference at Hiroshima City Hall on November 8, 2007. They told those in attendance that it is vital to continue conveying the reality of the atomic bombing since justifications for its use are deeply rooted and there is a widespread lack of awareness regarding the true consequences of nuclear weapons.

Ms. Okada related her account of the bombing four times between October 15-23 at universities and other venues in such cities as Alliance, Ohio and Chicago, Illinois. Mr. Yoneda and Mr. Yoshioka described conditions right after the bombing as well as its aftermath nine times between October 23-31 at universities, churches, and other sites in Denver, Colorado, and Boulder, Colorado.

The participants spoke of the positive reaction to their appearances. Mr. Yoneda and Mr. Yoshioka said, “Some people who came to the exhibition clearly recognized the inhumane nature of nuclear weapons and changed their views.” Ms. Okada also stressed the significance of visiting the United States, remarking, “After my testimony, some students told me they would inform their friends about Hiroshima and give serious thought to how peace can be achieved.”

The Hiroshima Peace Culture Foundation is running announcements in local newspapers and college newspapers to promote the Atomic Bomb Exhibitions and solicit donations to help defray the cost of the project.
ツイート
Return