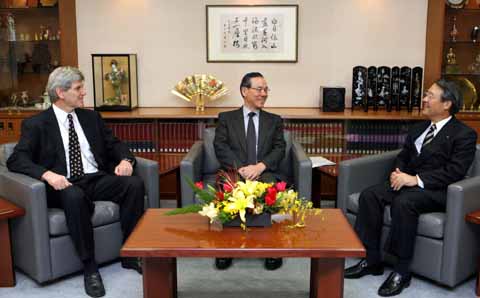 The Hiroshima Peace Media Center serves as a voice for Hiroshima’s call to abolish nuclear weapons and advance peace in the world. Inaugurated on January 1, 2008, the Hiroshima Peace Media Center, grounded on over 60 years of extensive reporting by the Chugoku Shimbun on matters of peace and war, is the only media agency in the world devoted exclusively to coverage of peace-related concerns.

To mark the opening of the new Peace Media Center, Kenzo Oshima, Senior Vice-President of the Japan International Cooperation Agency (JICA) and a survivor of the atomic bombing, Steven Leeper, Chairman of the Board of Directors of the Hiroshima Peace Culture Foundation, and Kazuyuki Kawamoto, President of the Chugoku Shimbun, sat down to discuss its mission and related themes.

The mission of the Peace Media Center

Kawamoto: Sixty-three years will soon have passed since the first atomic bombing in human history took place in Hiroshima on August 6, 1945. On that day, the Chugoku Shimbun suffered immense devastation in terms of both physical damage to its facilities and the loss of human lives－in fact, our death toll of 113 employees totaled about one-third of our workforce at the time. Ever since this catastrophe, we have been committed to coverage which conveys the facts of the atomic bombing, the appeal for “No more Hiroshimas,” and the necessity of abolishing nuclear weapons and fostering a world at peace.

At the same time, as a local newspaper, the Chugoku Shimbun has not had sufficient means of extending our reach beyond western Japan. And so, in order to raise our voice so the rest of Japan and the planet at large can hear our call from the hypocenter of the world, Hiroshima, we launched the Hiroshima Peace Media Center on January 1, using the Internet to communicate beyond national borders in both English and Japanese. Today I would like our two guests to share their ideas and their advice.

Oshima: I fully agree with the importance of transmitting messages from the city of Hiroshima and that the world needs to hear this voice in today’s lingua franca, English. In this age, compared to other means of communication, the Internet is far more effective at delivering these messages from Hiroshima to every corner of the globe. I have great faith in the success of this endeavor and I’m confident the center will attract a considerable response.

Leeper: The presence of a reliable media source to report peace-related issues is vitally important. I believe, too, that the city of Hiroshima has earned respect in the United States, due in large part to the many years in which hibakusha have resolutely spoken out. Transmitting messages from Hiroshima is imperative, of course, but we must also keep in mind that the Internet often includes information that is politically or ideologically biased and thus the credibility of the Peace Media Center is dependent on the veracity of its communications.

Oshima: I agree. I think it’s also important that this media center play the part of information center, too. For example, readers can follow current discussions taking place on the issues of nuclear proliferation and disarmament, where these discussions are occurring, and where international conferences are being held. A network of like-minded organizations should be created, too, involving peace agents that are active in the world, though evenhanded in their work.

Leeper: The center must also have a strategy for promotion to raise the profile of its website worldwide.

Kawamoto: We are contemplating, too, the possibility of interactive exchanges, through our website and newspaper, that can bridge national borders.

Leeper: Perhaps you could invite regular contributions on current issues from other parts of the world, such as Africa, South America, and the United States. Mayors for Peace, with a membership of nearly 2,000 cities around the world, might introduce you to suitable contributors.

The current state of the world

Kawamoto: In the 1970s and 1980s, the United Nations held a series of special sessions on disarmament and a movement advocating the abolition of nuclear weapons gained momentum worldwide, but the 1990s, after the collapse of the Soviet Union, suffered a waning interest in nuclear issues. In fact, in the late 1990s, there was a resurgence of “power politics” in the international arena and the terrorist attacks of September 11, 2001 have resulted in an era of terrorism and wars of retaliation, further fueling this trend towards “power politics.”

Oshima: Nuclear proliferation has become a grave issue in the international community. Although we have the Nuclear Non-Proliferation Treaty (NPT), this agreement has been in danger of breaking down for quite some time. The NPT review conference is held every five years, but recently has failed to produce any tangible results. From personal experience, I know that advancing nuclear disarmament is not at all a simple matter. Essentially, under the NPT, the parties are committed to nuclear non-proliferation and the nuclear weapons states have obligated themselves to nuclear disarmament. And yet we have seen little progress in this pledge to disarm. Nuclear weapons states repeatedly call for non-proliferation, but speaking in tangible terms, their actions are lacking. Many in the United Nations feel this way, too. The biggest concern is that nuclear parity may collapse, provoking major wars or a nuclear catastrophe. There is also concern that nuclear weapons or other weapons of mass destruction might fall into the hands of terrorists. When I was living in the United States, the sense of anxiety in this regard seemed to be growing.

Leeper: The vast majority of member cities of Mayors for Peace call for the abolition of nuclear weapons, but this demand for abolition has not yet emerged as a mainstream voice of the earth. Thus, we must work with the world’s mayors to raise this voice against nuclear weapons from the city level to the national level to the global level. Before the next NPT review conference in 2010, we must work from the grassroots level to foster a mood which demands that nuclear weapons never be used and that wars never be fought.

Oshima: In May 2005, we held an atomic bomb exhibition in the lobby of the U.N. headquarters in New York. This had not been possible for many years. And in April 2007, a film called “Hiroshima Ground Zero” was shown at the United Nations. This film, which attempted to depict the bombing of August 6, 1945 using computer animation, was met with a powerful response. New trends such as these seem to be on the rise at the United Nations. If the scope of these activities expands, they may empower a larger movement towards nuclear abolition.

Kawamoto: In September 2008, the G-8 Summit of Lower House Speakers will be held in Hiroshima. The city has long wanted political leaders of the G-8 countries to visit Hiroshima in person. We may take this opportunity to urge that the NPT be appropriately reviewed.

Leeper: Hosting this summit in Hiroshima is an important step forward. House Speaker Nancy Pelosi is scheduled to attend the conference from the United States and she holds the third-highest office after the President and Vice-President. Her visit, therefore, will be a significant event and we hope to make the most of this opportunity.

Roles of the Peace Media Center

Kawamoto: In addition to furthering relief measures for hibakusha around the world, what roles might the Peace Media Center play as a resource based in Hiroshima?

Oshima: The most important role would be keeping the facts and memories of the bombing alive in the minds of the world. This is a vital task for the center. However, the center must not simply report retrospectively on the past but also pursue peacebuilding in a forward-looking approach. Coverage involving the atomic bombings must continue being conveyed both in Japan and abroad, but this is not enough. One noteworthy development involving the role of Hiroshima broadens its symbolic status as a city of peace by serving as an actual “peace mecca.” An example of this is the training program for peacebuilding conducted at Hiroshima University and commissioned by the Ministry of Foreign Affairs. This is a very positive program, proactive and forward-looking.

Kawamoto: I have high expectations for the program, too, in promoting human capacities for peacebuilding from here in Hiroshima.

Oshima: Peacebuilding is surely a viable field in which Japan can contribute to the international community. Many countries are naturally concerned about peacebuilding issues, which involve such administrative areas as economic development, humanitarian assistance, and health care. However, another area of administration, police and military forces, is particularly challenging and security sector reform is integral to progress in the rest of this peacebuilding work. We should also make note of the growing concern over global warming, which could eventually breed conflict and war. In April 2007, the U.N. Security Council conferred on the issue of climate change, since it may increase the potential for discord. This is a grave issue, beyond simply providing emergency assistance or development aid, as it will ultimately affect human security and peace.

Kawamoto: As we transmit information from Hiroshima, we must be clearly aware of current developments in the world.

Leeper: Hiroshima has been engaged in an appeal for the abolition of nuclear weapons and the end of war as we know it, guided by a philosophy of reconciliation, not retaliation. With the world now standing at a dangerous crossroads, the Hiroshima Peace Media Center must advance this hallmark of Hiroshima to the world.

Kawamoto: Yes. As a media agency based in Hiroshima, where the nuclear age began, we are committed to taking this new step forward towards the abolition of nuclear weapons and the fulfillment of a more peaceful world. Thank you for your good thoughts today.

A former Ambassador to the United Nations, Mr. Oshima joined the Ministry of Foreign Affairs in 1967. In 2001, he was appointed Undersecretary General for Humanitarian Affairs of the United Nations. Since October 2007, he has served as Senior Vice-President of the Japan International Cooperation Agency (JICA). Born in Hiroshima, Mr. Oshima was exposed to the atomic bomb at the age of two and lost his mother in the bombing. He is 64 years old.

Mr. Leeper was born in the U.S. state of Illinois and spent several years of his childhood in Japan prior to returning in 1985. He worked as a translator on materials for Hiroshima Peace Memorial Museum and has been an active voice in the global peace movement. In 2002, Mr. Leeper joined the staff of Mayors for Peace and has held his current post as Chairman of the Board of Directors of the Hiroshima Peace Culture Foundation since April 2007. He is 60 years old.