Mayors for Peace: number of member cities to soon exceed 2000 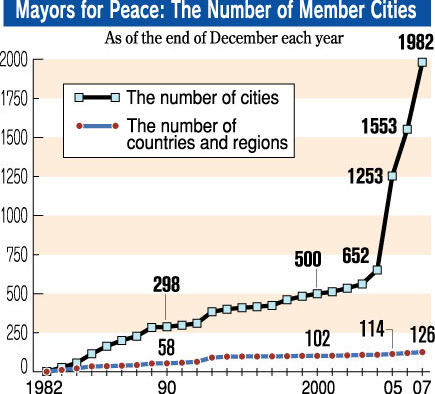 The number of member cities in the organization Mayors for Peace (Tadatoshi Akiba, Mayor of Hiroshima, currently serves as president) is expected to exceed 2000 by the end of January 2008, reaching approximately 2020 cities. Mayors for Peace is currently advancing an emergency campaign called “2020 Vision,” aspiring to a global ban on nuclear weapons by the year 2020, and the rapid increase in membership of late is now serving as a springboard to build momentum toward this goal.

As of December 2007, Mayors for Peace had a membership of 1982 cities in 126 countries and regions. With a number of cities in Scandinavian countries expected to join--in response to Mayor Akiba's call during his visit to that area this past November--membership will soon surpass 2020 cities.

Formerly known as the World Conference of Mayors for Peace Inter-City Solidarity, Mayors for Peace was established in Hiroshima in 1982 upon appeals from the mayors of Hiroshima and Nagasaki. It was officially registered in 1990 as a United Nations NGO with the Department of Public Information and changed its name to Mayors for Peace in 2001.

In addition, Mayors for Peace has an active membership in such places as Uganda and Palestine, where NGOs have been involved in promoting its work among their municipalities.

Mayors for Peace has established a bureau in Ypres, Belgium to implement its work on the European continent as it strives toward abolishing nuclear weapons. The organization has been seeking contributions from cities, foundations, and companies in support of its activities.

2020 Vision, an Emergency Campaign to Ban Nuclear Weapons
An urgent campaign to realize the total abolition of nuclear weapons by the year 2020 through the collaboration of the world's cities, NGOs, and citizens. Launched by Mayors for Peace in 2003, campaign activities are aimed at effecting a Nuclear Weapons Ban Treaty in 2010. Towards this end, its action plan regards the Nuclear Nonproliferation Treaty (NPT) review conferences, held every five years, as significant benchmarks. This action plan enters the third of its four phases in May 2008.
ツイート
Return