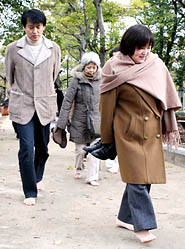 On the morning of January 1, 2008, near the hypocenter at Peace Memorial Park in Hiroshima, a ceremony was held dubbed the "Barefoot Memorial Service for the Atomic Bomb Victims." Hiroyuki Kubo, 76-also known as Kankyusha Kumosuke, his stage name as a traditional storyteller-has been leading this ceremony for the past 13 years.

Twenty-one barefooted participants took part in the ceremony this year, paying their respects at memorials in the park on a cold, windy day. They began by offering a minute of silent prayer in front of the Memorial Mound at 8:15 a.m., the time of the bombing, then continued to four other monuments, including the Monument in Memory of Korean Victims of the A-bomb.

Sixty-three years ago, on August 6th, Hiroshima was turned into a charred wasteland as a consequence of the atomic bombing. As people moved through the city in the aftermath, the soles of their shoes melted and stuck to the bottoms of their feet. In this wintertime ceremony, the participants can experience a kind of kinship with the survivors as they walk barefoot on the cold earth and suffer similar discomfort.

Kazuki Fujimoto, 13, a first year student at a junior high school in Yokohama who is visiting his relative's home in Hiroshima, said, “As I walked through the park, laying flowers and praying at the memorials, I could feel the spirit of the people who died in the bombing.”

The ceremony was conceived 18 years ago when Mr. Kubo was visiting Peace Memorial Park with a dance troupe from South Africa. As he explained that “the ashes of thousands of victims remain resting in this ground today,” the women from South Africa removed their shoes and began to walk barefoot. This experience was the inspiration for the current “Barefoot Memorial Service.”
ツイート
Return