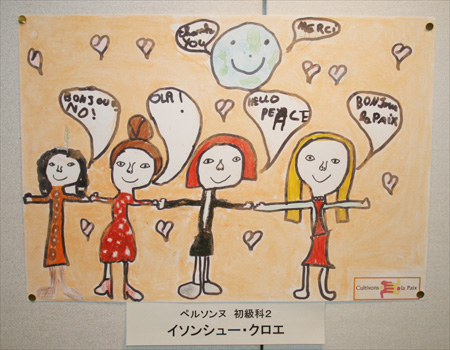 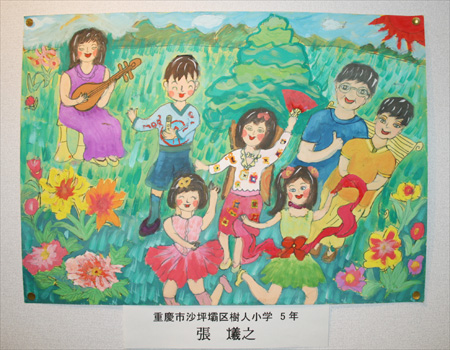 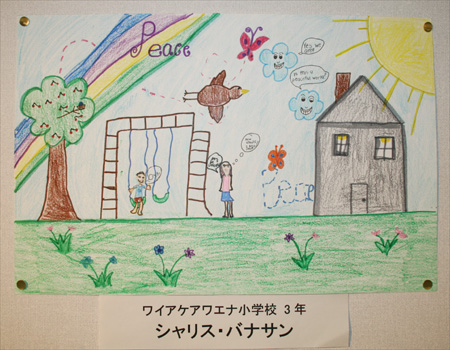 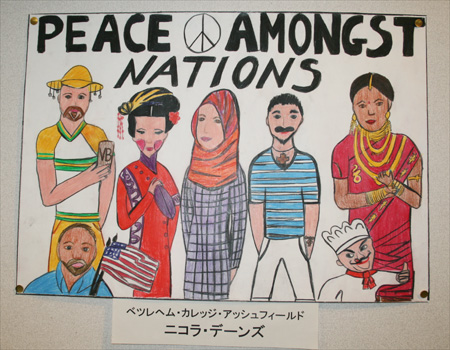 “The Children's Peace Picture Contest Exhibition,” consisting of pictures created by elementary school and junior high school students from eight countries, is currently being held at Hiroshima Peace Memorial Museum. Among 7892 pictures submitted from eight countries--the United States, Russia, France, Germany, Australia, Canada, China, and Japan--172 of these pictures are on display. The exhibition, which offers visitors the uplifting feeling of children's eager wishes for peace, continues until January 31, 2008.

Chloe Issanchou, a second grader at Perussonne CE( Elementary School ) in Aubagne, France, drew a picture in which four people are calling out “Hello” and “Peace” in four languages. The figures are holding hands and behind them is an image of the Earth saying “Thank you” in French and English.

Sharis Banasan, a third grader at Waiakeawaena Elementary in the U.S. state of Hawaii, depicted children playing together under a rainbow in a blue sky. For the child, this setting of daily life seems to express the idea of “peace.”

Hitomi Yoshinaga, a second-year student at Hiroshima University Junior High School, drew a picture of doves taking wing from Atomic Bomb Dome with the motto “Let us widen the circle of peace.” With this image, she expresses the importance of appealing for peace from Hiroshima to the world.

Staff member of the museum's Outreach Division, Makoto Ishida, 30, observed, “Although all the pictures share the same theme, the way this theme is expressed is quite different depending on the country. For instance, some children also pasted in clippings from magazines in their pictures.”

The contest was launched in 1986, commemorating the United Nations-sponsored “International Peace Year,” in order to provide an opportunity for children, who will inherit our world, to appreciate the importance of peace and the value of life.

For this year's exhibition, marking the 22nd year, entries were solicited from 93 children's groups, including schools among Hiroshima's sister cities and organizations that have participated in the past.

Kelly Ward, 26, a Canadian English teacher visiting Hiroshima, remarked, “There are so many pictures with powerful messages. I felt that the hearts of these children are united for world peace in a special city, Hiroshima.”
ツイート
Return