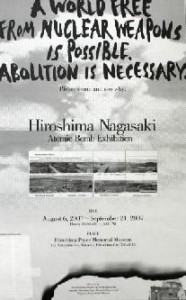 To promote the Atomic Bomb Exhibitions organized by the city of Hiroshima, now being held nationwide in the United States, the Hiroshima Peace Culture Foundation has been seeking donations from the public in order to place announcements in American newspapers. These donations have exceeded 5 million yen (about $50,000 US) to date, enabling the launch of publicity efforts this month. Atomic Bomb Exhibitions are planned for 101 cities in the United States and the Hiroshima Peace Culture Foundation is calling for continued support as it strives to raise public awareness in America for the abolition of nuclear weapons.

Announcements for the Atomic Bomb Exhibitions declare, in English, “A world free from nuclear weapons is possible. Abolition is necessary.” And they encourage the public to visit the exhibitions, inviting them to “Please come and see why.”

Full-page announcements will run in local newspapers and college newspapers in 8 of the 19 cities where exhibitions are scheduled to be held from the beginning of January to the end of March.

The Hiroshima Peace Culture Foundation is seeking to raise a total of 6 million yen for this publicity campaign by the end of August. Since the summer of 2007, collection boxes have been placed at Hiroshima Peace Memorial Museum, Hiroshima National Peace Memorial Hall for the Atomic Bomb Victims, and at other locations. Donations can also be made through bank transfer.

An official in the Outreach Division at Peace Memorial Museum appealed for continuing support, saying, “Our donations are nearing the goal we have set, but the more contributions we're able to collect, the more widely we can publicize the exhibitions in America.”

By the end of 2008, Atomic Bomb Exhibitions will be held in two cities in each of the 50 U.S. states and the nation's capital, Washington, D.C. Last year, from the fall, exhibitions were held in six cities.
ツイート
Return