The Global State of Nuclear Weapons 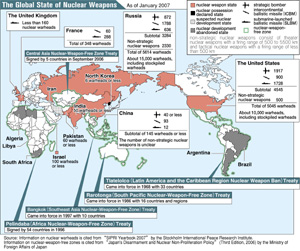 In August 1945, atomic explosions struck Hiroshima and Nagasaki, claimed the lives of over 200,000 people, and have continued to inflict radiation-related suffering on the survivors. This was the start of the Nuclear Age.

The United States, which waged these two nuclear attacks, was followed by the Soviet Union, the United Kingdom, France, and China as possessors of nuclear weapons. In the late 1980s, the number of nuclear warheads in the world reached 70,000. India and Pakistan, in 1998, declared status as nuclear weapons states and the North Korean government proclaimed its possession of nuclear weapons in 2006. Israel has been considered a de facto nuclear power for a number of years.

The “SIPRI Yearbook 2007,” published by the Stockholm International Peace Research Institute (SIPRI) in Sweden, reports that over 26,000 nuclear warheads remain on earth. Among them, 11,530 warheads are in an active state of readiness, sustaining the possibility of an immediate launch from missiles and aircraft. Over 90 percent of the world's nuclear weapons are possessed by the United States and Russia, which inherited these arms from the Soviet Union.

Although the number of nuclear warheads has decreased from the peak of 70,000, the destructive power of the remaining weapons has multiplied dramatically and their “usability” has expanded due to a reduction in physical size. As the number of nuclear powers increases, the threat of accidental use, regional nuclear war, or nuclear terrorism grows. Thus, the danger that nuclear weapons might be used is not waning; on the contrary, this danger is escalating.

At the same time, there is light in the darkness. Nuclear-weapon-free zones, where possession and deployment of nuclear arms is banned--including much of the Southern Hemisphere--are growing in number. In addition, the cities of Hiroshima and Nagasaki, spearheading the Mayors for Peace campaign that aims to abolish nuclear weapons by the year 2020, are being joined by cities from around the world in this quest.

Humanity continues to struggle with the massive challenge of effecting a total eradication of nuclear weapons from our planet. Views from the G8 Summit of the Lower House Speakers, to be held in September 2008 in Hiroshima, are eagerly awaited.
ツイート
Return