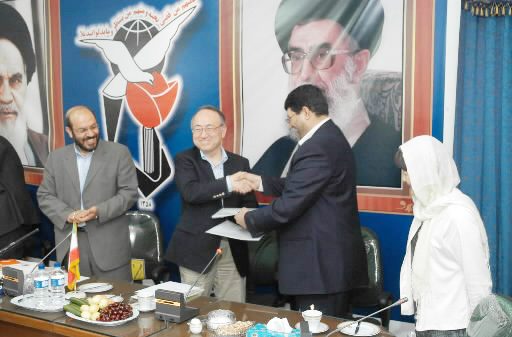 From mid-January, the Department of Pathology at Hiroshima University Graduate School of Biomedical Sciences will host a group of four doctors and nurses from Iran. During a three-week stay in Hiroshima, these medical personnel will be provided training that involves treatment and research designed to assist poison gas victims from the Iran-Iraq War that took place from 1980-1988.

While Iran has become increasingly isolated in the international community due to the issue of its nuclear developments, these doctors and nurses have been invited to take part in the country's first training abroad to study the effects of poison gas. This training is one of the productive results of grassroots activities that were initiated by participants of the Hiroshima World Peace Mission, a project coordinated by the Chugoku Shimbun and the Hiroshima International Cultural Foundation in 2004.

The trainees will consist of one associate professor, two doctors who are treating the respiratory disorders of poison gas victims, and one nurse. At a branch of the Kure Kyosai Hospital, they will study the system that processed the results of health checkups and records of aftereffects involving the approximately 4,000 poison gas victims at the defunct Japanese Army Poison Gas Factory on Ohkunoshima Island in Hiroshima Prefecture.

These medical personnel will also receive training in epidemiological research on atomic bomb survivors at the Radiation Effects Research Foundation in Hiroshima. And, at Hiroshima University, they will learn specialized techniques to examine lung specimens and run tests with cutting-edge equipment. Hiroshima University, along with other area hospitals, maintains the world's largest repository of records concerning cases of poison gas effects, with a total of approximately 6,800 examples.

According to the Iranian government, the Iraqi army used poisonous mustard gas as many as 300 times during the Iran-Iraq War. It is said that about 100,000 Iranians died or were injured and that even today about 50,000 Iranians suffer from respiratory, skin, eye, and other ailments. However, research that can grasp the true nature of the damage and lead to effective courses of treatment has not progressed at a satisfactory pace.

In March 2004, five members of the Hiroshima World Peace Mission, accompanied by two reporters and a photographer from the Chugoku Shimbun, visited Iran. They spent time at an area near the Iraqi border that had been hit by poison gas and spoke with the local residents about their experiences. In these interactions, the group from Hiroshima also shared the reality of the atomic bombing.

After returning to Japan, Shizuko Tsuya, a member of the Peace Mission and the President of a Hiroshima-based NPO called “Moct,” along with other supporters, have been inviting poison gas victims from Iran to attend the annual Peace Memorial Ceremony and take part in medical checkups each year since August 2004. Then, in 2006, Professor Kouki Inai from the Department of Pathology accompanied Ms. Tsuya to Iran. During this visit, Professor Inai agreed to joint research and personnel exchanges with a medical research center in Tehran, the capital of Iran. One outcome of their collaboration is this visit by the medical team from Iran for training in Hiroshima. Travel expenses to Japan will be borne by the Iranian delegation while costs during the participants’ stay will be covered by the Department of Pathology and “Moct.”

Professor Inai remarked, “As a researcher at Hiroshima University, where we have studied major war damage involving the atomic bombing and poison gas, I have high hopes that we can support the development of human resources in Iran so that scientific research and treatment can be carried out to the satisfaction of the medical experts there.” And Ms. Tsuya added, “Hiroshima was encouraged in its reconstruction by support from around the world. I would like to continue these exchanges with the Iranian people to help the poison gas victims of that country.”

Hiroshima World Peace Mission
In collaboration with the Hiroshima International Culture Foundation, the Chugoku Shimbun implemented a project commemorating the 60th year after the atomic bombing, in which hibakusha and citizens paid visits to nuclear powers, countries experiencing conflict, and other parts of the world between 2004 and 2005. In addition to the continuing threat posed by nuclear weapons in the 20th century, terrorism and wars of retaliation have been waged repeatedly since the terrorist attack in the United States on September 11, 2001. This situation has resulted in a vicious circle where enmity and violence predominate. Against this backdrop, the Peace Mission was launched to convey the consequences of the atomic bombing, as well as the message of “peace and reconciliation” learned through this experience, to the people of the world, particularly citizens of the nuclear powers and countries in conflict. From a total of 86 applicants, four or five members for each mission were selected and the missions lasted three to five weeks. The first mission, in March 2004, went to Iran and South Africa while the sixth and final mission returned from the United States in May 2005. In all, 29 people, including nine hibakusha, participated in the project. The countries visited numbered 13, including Russia, China, South Korea, France, Britain, India, and Pakistan.
For more information, please refer to:
http://www.chugoku-np.co.jp/hwpm/e/index.html (English)
http://www.chugoku-np.co.jp/hwpm/ (Japanese)

Defunct Japanese Army Poison Gas Factory
In 1929, the former Japanese Army built a poison gas factory on Ohkunoshima Island, located 3 kilometers offshore from the town of Tadanoumi in Hiroshima Prefecture. This factory continued to operate until World War II came to an end in 1945. During this period, about 6,600 tons of poison gas, including yperite, lewisite, and cyanide, were produced at this factory. By the end of the war, almost 7,000 people, including regular factory workers, conscripted laborers, and mobilized students, were engaged in gas production. Even today, about 4,000 of these people suffer from such aftereffects as chronic bronchitis.
ツイート
Return