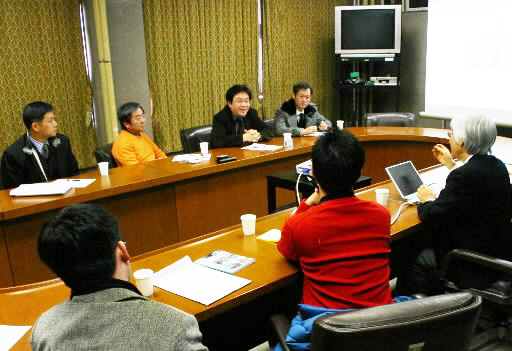 Training for ten South Korean doctors and medical personnel began in Hiroshima on January 15, 2008. These practitioners have been involved in emergency care at medical facilities run by the Korea Institute of Radiation & Medical Science.

The Hiroshima International Council for Health Care of the Radiation-exposed (HICARE), comprised of the Hiroshima Prefectural Government, the Hiroshima City Government and medical and research organizations, received them for training.

On the first day, the trainees were offered background information on hibakusha relief measures and the activities conducted by HICARE at the Hiroshima City Office and Hiroshima Prefectural Office. Afterwards, they visited the Hiroshima University Research Institute for Radiation Biology and Medicine in downtown Hiroshima where Professor Kenji Kamiya provided an outline of atomic bomb radiation exposure as well as the actions to be taken by Hiroshima University to treat the severely exposed in the event of a nuclear power plant disaster. The doctors from South Korea intently posed such questions as “How will you obtain accurate information?” and “What safety measures will be implemented in the case of a critical level of radioactive contamination?”

Dr. Park Kyung-Duk, 46, showed keen interest in the Hiroshima University system, remarking, “I hope to learn all about their emergency response to such a disaster during my stay in Hiroshima.”

The medical personnel will receive training through January 17, 2008, including sessions covering the impact of the atomic bomb on the human body and health care for the exposed, at the Hiroshima Red Cross Hospital & Atomic Bomb Survivors Hospital, the Radiation Effects Research Foundation, and other facilities.
ツイート
Return