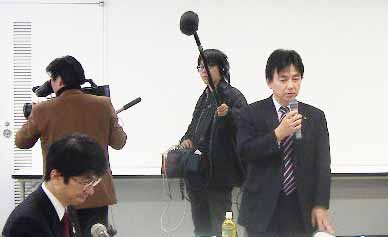 Mayors for Peace (President, Hiroshima Mayor Tadatoshi Akiba), with Hiroshima and Nagasaki the only member cities from Japan, is now determined to increase the number of Japanese cities taking part in the organization. In a board meeting of the National Council of Japan Nuclear Free Local Authorities (President, Nagasaki Mayor Tomihisa Taue) held in Fujisawa, Kanawaga Prefecture on January 18, a policy of cooperation with Mayors for Peace was announced and encouraged by a representative from the city of Hiroshima. Nagasaki Mayor Taue also urged the council’s member cities to join Mayors for Peace.

Until recently, Mayors for Peace had focused its efforts solely on the international community while the National Council of Japan Nuclear Free Local Authorities has served Japan. However, the two groups share the same goal--the eradication of nuclear weapons from the earth--and so they have been involved in discussions concerning the possibility of greater cooperation. The announcement of January 18 is the fruit of these talks.

In 2003, Mayors for Peace launched the Emergency Campaign to Ban Nuclear Weapons (the “2020 Vision Campaign”), an effort to eliminate all nuclear weapons by the year 2020. As of December 17, 2008, 1,982 cities from 126 countries and regions have become members of Mayors for Peace, but Hiroshima and Nagasaki are currently the only Japanese cities involved in this organization. With the efforts of the 2020 Vision Campaign proceeding with some success, it was felt that solidarity among cities in Japan would contribute to the strength of the Mayors for Peace alliance.

Mayors for Peace was conceived in 1982 by the cities of Hiroshima and Nagasaki in order to convey the experience of the atomic bombings to the world. Two years later, in 1984, the National Council of Japan Nuclear Free Local Authorities was established. Until now, Mayors for Peace has never attempted to expand its membership in Japan.

The Peace and International Solidarity Promotion Division of the Hiroshima Peace Culture Foundation commented, “Obtaining the cooperation of all Japanese cities is vital. We hope to expand the organization’s membership by networking through the links that exist among cities in Japan.”

National Council of Japan Nuclear Free Local Authorities
The council consists of local authorities that have officially declared their intention to call for the abolition of nuclear weapons or compliance to the three non-nuclear principles (not possessing, not producing, and not permitting any nuclear weapons into the country). This organization was established in 1984 and, as of October 2007, has 240 members. The members share peace-related programs and hold touring A-bomb Exhibitions.
ツイート
Return