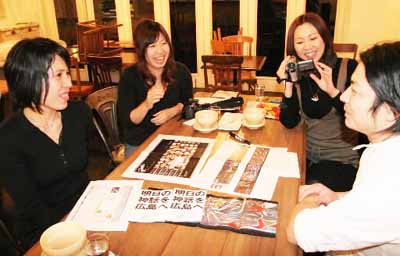 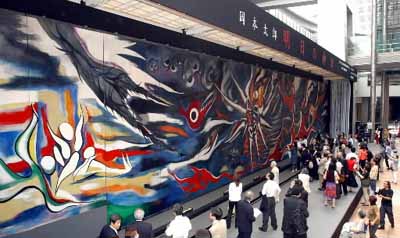 Two young residents of Hiroshima are planning to launch a website to support the campaign to bring “Myth of Tomorrow,” a mural by Taro Okamoto that depicts the atomic bombing, to the city for its permanent home. Their website will display the messages and photos of citizens of Hiroshima who are appealing to the Taro Okamoto Memorial Foundation for Contemporary Art, located in Tokyo, to select the city over the competing communities of Shibuya Ward, Tokyo, and Suita, Osaka.

Mika So, 27, who took part in a signature drive with a citizens group called the Hiroshima Bid Association for Taro Okamoto’s “Myth of Tomorrow,” asked one of her colleagues, Hiromi Shimada, 27, a web designer, to work with her on creating the site.

On January 21, 2008, they began conducting interviews and have so far obtained 30 messages from friends and business acquaintances. These messages demonstrate the strong desire of Hiroshima citizens to bring the mural to the city, with such sentiments as “Only Hiroshima can truly make the mural shine” and “The mural depicts Hiroshima’s past and its presence here can have an impact on our future.”

The website will be launched in early February and known by the name “TARO’s Cafe Hiroshima.” Hopes are high that the site will create interaction among visitors about the mural, much like a casual cafe. To obtain more messages from Hiroshima citizens, they plan to interview people in conjunction with another signature drive by the Hiroshima Bid Association on January 27.

The Taro Okamoto Memorial Foundation plans to select a city for transfer of the mural by April. Ms. So and Ms. Shimada eagerly await the decision, remarking, “Some say that bigger cities with more financial backing have an advantage over Hiroshima, but Hiroshima has the passion of its citizens and we feel this enthusiasm when we speak with them about the mural.”

“Myth of Tomorrow”
This 5.5-meter-high, 30-meter-long mural was created by Taro Okamoto (1911-1996) while in Mexico in 1968-69. After its completion, it went missing until September 2003 when it was rediscovered and shipped to Japan for repair. At present, it is on display at the Museum of Contemporary Art in Tokyo. The mural depicts the moment of an atomic bomb explosion, including a flaming skeleton under a mushroom cloud. Taro Okamoto is known for “Tower of the Sun,” a symbol of the Osaka Expo as well as his famous remark, “Art is an explosion!” He arguably had the most vivid personality among artists of postwar Japan.
ツイート
Return