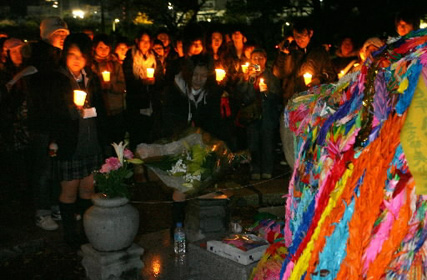 The “Flame of Peace,” taken from the embers of Hiroshima’s charred earth after the atomic bombing and kept burning in Hoshino Village, Fukuoka Prefecture for the past 63 years, was used to light about 100 candles in front of the Monument in Memory of the Korean Victims of the A-bomb in Hiroshima Peace Memorial Park on the evening of November 28.

Candle Night 1 Pi:ce, a citizens’ group in Osaka, organized the event. They lit a flame from the original fire tended in Hoshino Village and took this flame by boat from Kobe to South Korea. After conducting a peace event in Busan, South Korea, they arrived in Hiroshima for the conclusion of their project.

Young people, Japanese Koreans, and others held candles and reflected on peace. Takehiko Yoshizawa, 30, the leader of the group, stated, “We should ponder the preciousness of life.” This sentiment was shared by the participants amid the striking mood.