Conductor of the Sarajevo Philharmonic Orchestra returns to Hiroshima 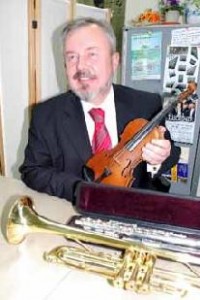 Emir Nuhanovic, 46, the conductor of the Sarajevo Philharmonic Orchestra, returned to Hiroshima for the first time in nine years. He was visiting Japan at the invitation of the Japan Foundation and had requested a stay in Hiroshima. “Seeing my old friends in Hiroshima renewed my feeling that Sarajevo is not so isolated,” remarked Mr. Nuhanovic.

In November 2008, using his own funds, Mr. Nuhanovic founded a local music school for all ages in Bosnia and Herzegovina. He now plans to establish more music schools in three cities, including Sarajevo, next year.

During the war in Bosnia from 1992 to 1995, many musicians lost their lives and a large number of musical instruments were damaged or destroyed. Reviving music education in his home country has just begun. Mr. Nuhanovic expressed gratitude to the people of Hiroshima and said, “Support from Hiroshima citizens has strengthened our chance of success.”

While in Hiroshima, Mr. Nuhanovic gently handled a trumpet and violin that were donated by people from the city for delivery to Sarajevo. These are among the musical instruments that ANT-Hiroshima, a non-profit organization, has successfully collected for music education in Bosnia and Herzegovina.

Mr. Nuhanovic names two factors as the source of his passion for reviving music education. One is his own experience during the war in Bosnia. Despite the heavy bombardment of his city, the Sarajevo Philharmonic Orchestra continued to hold concerts. “It was risky,” he revealed, “since we could have become a target. But the hall was always packed with people. Music became a way to resist the violence.”

He also says that the memory of his first visit to Hiroshima in 1999 has remained in his heart. Mr. Nuhanovic took part in “August in Hiroshima,” an international music festival, at which he performed music for peace as a member of an orchestra consisting of 40 musicians from 12 countries. The experience convinced him that “in spite of our differences in nationality and ethnicity, music can bring together people in peace.” Now, based on this conviction, he is moving forward to put this belief into practice.

Despite the fact that Muslims, Croats, and Serbs battled to tragic ends during the war, he plans to accept students from these three ethnic groups at his new schools in an egalitarian manner. Mr. Nuhanovic says that he learned the spirit of reconciliation from his experience of Hiroshima.

He lives with his wife and two sons in Sarajevo.