Hiroshima A-bomb exhibitions in U.S. will continue in 2009 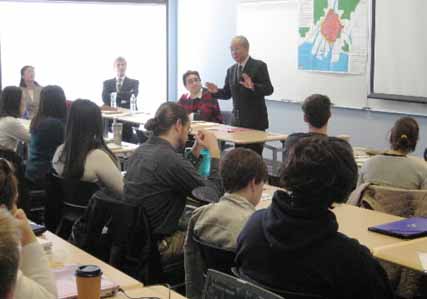 The Hiroshima Peace Culture Foundation, the body organizing the city of Hiroshima’s project to hold A-bomb exhibitions in the United States, plans to continue these exhibitions in 2009. The nationwide exhibitions in the U.S. started in September 2007 in order to raise public awareness for the abolition of nuclear weapons in the run-up to the 2008 presidential election. They were originally scheduled to conclude by the end of December 2008. However, the project will be extended so that awareness of nuclear weapons can be further heightened under the new administration of Barack Obama, who upholds the goal of nuclear abolition.

A-bomb exhibitions have already been held in a total of 101 cities in 44 states and the District of Columbia (Washington D.C.). Among the six states where exhibitions have not yet been held, including Idaho, plans are already laid to open exhibitions in 11 cities in three states after the new year. The foundation has also learned, through supporters, that over ten more cities are now expressing interest in holding exhibitions. To accommodate such requests, the project must continue beyond April, at which time a new budget could be allocated.

With cities still interested in holding exhibitions, the foundation feels that discontinuing the project would be undesirable and so ideas for maintaining it are being discussed. They are looking into such means as a video conferencing system so voices from the A-bombed city could be transmitted without sending staff members and A-bomb survivors to the United States.

Akira Tanigawa, deputy director of Hiroshima Peace Memorial Museum, remarked, “A-bomb exhibitions are very important opportunities to convey the true damage wrought by the atomic bombings. We would like to meet the requests for exhibitions in the United States.”