Message of peace by hibakusha accompanies Japanese toy to Africa 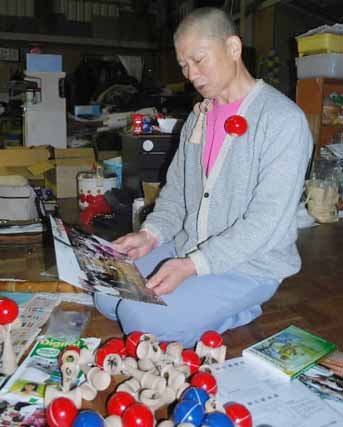 Hiromu Imada, 62, an A-bomb survivor (hibakusha) and director of the Hiroshima branch of the Japan Kendama Association, will leave Hiroshima on December 6 to visit Uganda and Kenya for about three weeks to teach local children the joy of playing “kendama,” a traditional Japanese toy. Mr. Imada has traveled to more than 20 countries so far to interact with the local people through playing “kendama.”

Mr. Imada will take about 300 “kendama” with him, which he has spent the past month preparing by writing on them such words as “Hiroshima” and “nebari” (perseverance) in Japanese ink and adjusting the length of the string attached to the toy.

He first visited Uganda two years ago. He went to three elementary schools to show children how to play “kendama” and gave them the toys and charts illustrating different techniques. After seeing the children “so absorbed in play that their eyes were full of life,” Mr. Imada decided to return to Africa so that more children can enjoy playing “kendama.”

In Uganda and Kenya, Mr. Imada will also offer sessions for peace education. He will speak about the atomic bombing, including the fact that his mother was pregnant with him when she encountered the blast, while showing photos which depict the devastation of Hiroshima in the bomb’s aftermath.

Mr. Imada expressed his enthusiasm for the trip, remarking, “I would like to shorten the distance between Hiroshima and Africa through “kendama” by conveying a message of peace.”