Gathering to support A-bomb disease lawsuits is held in Hiroshima 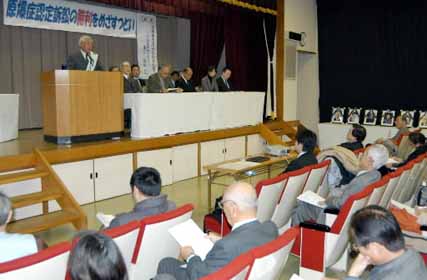 The Association to Support A-bomb Lawsuits, which provides support for class action lawsuits filed in Hiroshima over A-bomb disease claims, held a gathering of plaintiffs and supporters at the Hiroshima Institute of Technology on December 6. Roughly 100 people, including members of both factions of the Hiroshima Prefectural Confederation of A-bomb Sufferers Organizations, pledged solidarity in their pursuit of A-bomb disease certification for all the plaintiffs.

A total of 64 plaintiffs have been contesting their cases at the Hiroshima District and Superior Courts in the class action lawsuits filed in Hiroshima. At the venue for the gathering, photographs of 16 of the 18 plaintiffs who have passed away since filing their claims were displayed.

Kazuyuki Tamura, representing the association, stressed that “These A-bomb survivors suffering from disease are not in a position to take a leisurely time with their lawsuits.” Mr. Tamura urged the participants to strengthen their campaign for an early settlement, mentioning Chief Cabinet Secretary Takeo Kawamura’s demonstrated willingness to consider a settlement en masse next spring.

The following speaker, Shizuteru Usui, president of the Hiroshima Prefectural Medical Association, criticized the screening process for the certification of A-bomb diseases, saying, “The uniform procedure disregards such factors as the individual nature of how the survivors suffered the atomic bombing.” Dr. Usui, who served as a member of the screening committee after being appointed by the central government, added, “As long as the atomic bomb’s influence on their illnesses cannot be denied, all the plaintiffs should be granted certification for their diseases.”