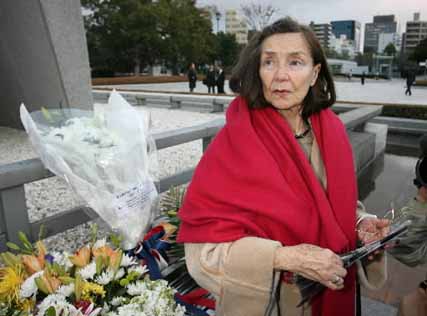 Emmanuelle Riva, 81, the actress who starred in the movie “Hiroshima, Mon Amour,” has returned to Hiroshima 50 years after the shooting of the film. The movie was jointly produced by Japan and France and set in the city during its period of reconstruction after the atomic bombing. On December 5, Ms. Riva strolled around the locations used for the film shooting and spoke earnestly of her desire for peace. She also interacted with the people of Hiroshima.

Ms. Riva arrived in Hiroshima on December 4, and, without showing any fatigue from her long trip, visited Hiroshima Peace Memorial Museum the next day. She walked around the area of the International Conference Center Hiroshima (where the Shin Hiroshima Hotel once stood) and recalled the old days, noting, “There are no longer any houses around here, but the outline of the mountains is the same.”

In front of the Cenotaph for the A-bomb Victims, Ms. Riva remarked, “At the time, I came here from France to make a movie about peace. This message, about the importance of peace, is still alive today.” She then offered flowers at the cenotaph and gazed silently at the Flame of Peace.

Ms. Riva also visited Cinetwin Hondori, a movie theater that was rerunning “Hiroshima, Mon Amour,” Hiroshima City Hall, and a gallery where her photos of Hiroshima were being exhibited. At the movie theater, when people greeted her, saying “welcome back,” she had difficulty finding the words to respond. “I just can’t believe that I’m back in Hiroshima after 50 years,” she explained. “I’m so moved that I don’t know what to say.”

At City Hall, she told Hiroshima Mayor Tadatoshi Akiba, “The city has grown bigger and more beautiful. I’m happy to see that Hiroshima has made a full recovery.” She also stated emphatically at a press conference, “I hope that Hiroshima will never experience such violence again.”