Hiroshima discusses peace on the day the Pacific War began 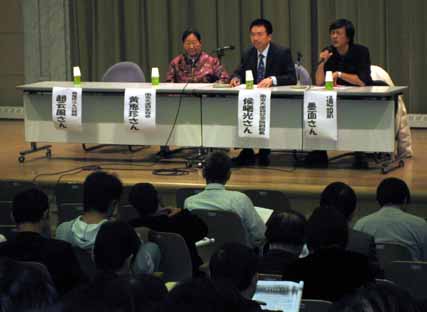 On December 8, the day war broke out in the Pacific in 1941, gatherings were held at locations in Hiroshima to reflect on war.

At Hiroshima Peace Memorial Museum, about 300 people assembled to consider the Nanjing Massacre that took place in 1937, listening to presentations by Hou Shu-guang, 43, deputy director of the Nanjing Massacre Memorial Hall, and Ms. Huang Hui-zhen, 86, a survivor of the massacre. “We must never repeat this tragic history,” Mr. Hou said. “Our two countries must work together to create a better future.”

At another gathering at the Otemachi Heiwa Building in downtown Hiroshima, about 30 members of the “Hiroshima Heiwa Juku” discussed the controversial statement of Toshio Tamogami, former Air Defense Force commander. Mr. Tamogami was recently dismissed from his post after publishing an essay which contradicted the Japanese government’s official view of the nation’s aggression in China and colonial rule of the Korean Peninsula. Tadayuki Kusunoki, 84, advisor to the Hiroshima Council against Atomic and Hydrogen Bombs, was detained in the former Soviet Union after World War II. He expressed strong opposition to Mr. Tamogami’s ideas, saying, “Having experienced the war myself, I cannot tolerate any distorted view of the war’s history.”