Exhibition on Isamu Noguchi, designer of the Peace Bridge 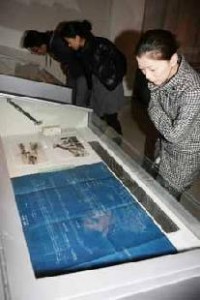 An exhibition entitled “Learning from Banraisha: Art and Urban Design of Hiroshima,” featuring the work of artist Isamu Noguchi (1904-1988), opened on December 8 in the art gallery at Hiroshima City University. Mr. Noguchi designed the Peace Bridge, a symbol of the reconstruction of Hiroshima, and among the items on display at the exhibition are materials related to the building of the Peace Bridge.

The roughly 40 items include a blueprint of the Peace Bridge in a scale of one-fiftieth the actual size, made in 1951, a year before the bridge was completed, and Mr. Noguchi’s letter addressed to one of his Japanese colleagues. Also displayed at the exhibition is a two-meter “Akari” lamp made in 1985 for the Venice Biennale in Italy. Mr. Noguchi had visited Gifu Prefecture on his way to Hiroshima and was captivated by the traditional Japanese paper there, which he employed in the design of his lamp.

Banraisha served as a kind of social club at Keio University in Tokyo, and Mr. Noguchi was involved in designing the space for it, but the room was dismantled in 2003. In order to renew public awareness of the importance of preserving the Peace Bridge, professors at Hiroshima City University and other participants organized a committee to hold this exhibition.

The head of the organizing committee, Professor Yoshiharu Maekawa of the Faculty of Art, Hiroshima City University, remarked, “We want people to understand the necessity of preserving the Peace Bridge which stands as a prayer for the repose of the dead and a message of hope to the world.” Admission to the exhibition, which will run through December 21, is free. Photographs of the Peace Bridge under construction are also being exhibited, concurrently, at Gallery G in downtown Hiroshima.