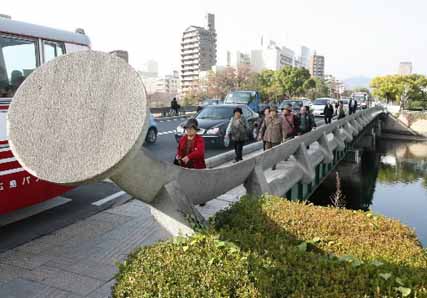 Eight design firms from seven foreign countries have indicated they will submit proposals for the design competition for the new pedestrian bridge that the city of Hiroshima plans to build adjacent to the Peace Bridge. This is the first time that a design competition for a city construction project has attracted proposals from foreign countries. The railings of the Peace Bridge were designed by a prominent sculptor, Isamu Noguchi (1904-1988). “As the Peace Bridge is well-known in the world, the competition has garnered a great deal of attention,” city officials say.

The city is expecting design proposals from two firms in Singapore, one firm each from Germany, Denmark, Switzerland, Austria, Spain and Australia, and 22 firms from Japan. Designs must be submitted by January 5, 2009, and the results of the selection process will be announced in March 2009.

In order to invite entries from abroad, the city of Hiroshima announced the competition to 159 embassies in Japan. The fact that the competition has attracted considerable attention overseas is an indication of the project’s importance, connected to a symbol of Hiroshima, an international city of peace.

The Urban Revitalization Division of the city of Hiroshima welcomes these submissions from abroad, saying, “The competition will have a higher chance of receiving a wide variety of design proposals. The high level of interest also suggests that many people in the world share Hiroshima’s aspiration for peace.”