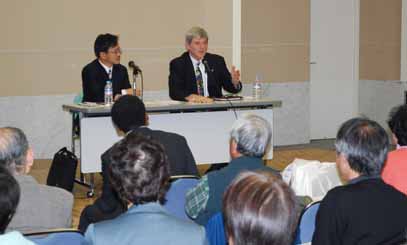 A seminar open to the public, entitled “‘Hiroshima’ in the United States,” was held at Hiroshima Peace Memorial Museum on December 13 and explored U.S. citizens’ perceptions in regard to the dropping of the atomic bombs. Yasuhiro Inoue, professor at Hiroshima City University, and Steven Leeper, chairman of the Hiroshima Peace Culture Foundation, spoke on the topic and engaged in discussion with an audience of about 150 people.

Professor Inoue reported the findings of his research conducted in 2005 on eight U.S. newspapers. He pointed out that articles which justify the dropping of the atomic bombs still appear in major newspapers. Mr. Leeper then related the fruitful outcome of the atomic bomb exhibitions in 52 U.S. cities that he took part in along with A-bomb survivors. “More cities have become members of Mayors for Peace and the exhibitions are still voluntarily organized by U.S. citizens to this day,” he said.

The seminar was organized by a group of A-bomb survivors committed to delivering their testimonies. Satoru Arai, 74, an A-bomb survivor and a third-generation Japanese-American, remarked, “It’s very unfortunate that the atomic bombings are not well understood in the United States. We must continue our efforts at conveying Hiroshima’s message.”