Symposium held to convey memories of Palestine and Hiroshima 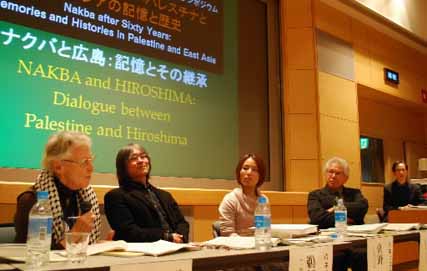 “Nakba and Hibaku: Dialogue between Palestine and Hiroshima,” a symposium to commemorate the 60th anniversary of “Nakba,” was held at Hiroshima City Plaza for Town Development through Citizen Exchange on December 14 before an audience of 150, including students. “Nakba” refers to the tragedy of the forced deportation of Palestinians from their land due to the establishment of the state of Israel in 1948.

Rosemary Sayigh, 81, a Beirut-based anthropologist who has been interviewing Palestinian refugees since the 1970s, delivered the keynote address. She stressed the importance of recording and handing down the Nakba experiences, noting, “Compared to the bombings of Hiroshima and Nagasaki, the volume of records on Palestinian refugees is awfully small.”

During a panel discussion, Masaki Uno, professor at Hiroshima City University, Akiko Naono, associate professor at Kyushu university, and Satoshi Ukai, professor at Hitotsubashi University, discussed the meaning of conveying Hiroshima’s experience while comparing it to that of Palestine. Professor Ukai remarked, “In both cases, the aggressors have never offered an apology. It’s now important to find new ways to draw out memories from the survivors.” Professor Naono added, “We should be sensitive to the bitterness and the emotional scars that survivors may still bear as well as the meaning of their silence and reluctance to talk about their experiences.”