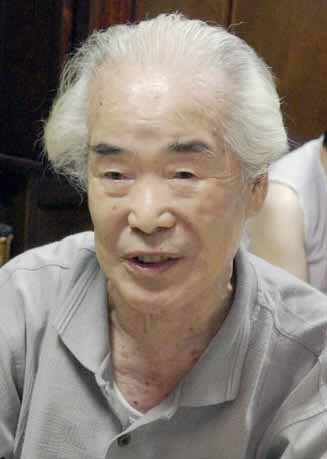 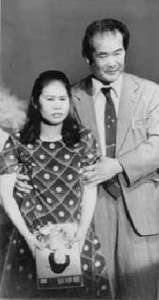 It was learned on December 16 that Kunizo Hatanaka, founder of the Mushroom Club, an organization composed of microcephalic patients and their families, passed away on November 6 at the age of 92. Mr. Hatanaka, a resident of Iwakuni, Yamaguchi Prefecture, died of a stroke at a hospital in Otake, Hiroshima Prefecture. A private funeral service was then held with only family members in attendance.

Kunizo Hatanaka was born in Mihara, Hiroshima Prefecture. His second daughter Yuriko, 62, was born with disabilities caused by prenatal exposure to radiation from the atomic bombing of Hiroshima. In 1959, they stepped into the public spotlight to encourage state support for microcephalic patients and their families.

Mr. Hatanaka ran a barbershop near the U.S. military base in Iwakuni. Along with the late author Tomoe Yamashiro, microcephalic patients and their parents, he formed the Mushroom Club and served as the first chairperson. Their efforts bore fruit and in 1967 the national government recognized the relationship between microcephaly and the A-bomb. The disease was included in the designated diseases as “short-distance early prenatal exposure syndrome” under the former the Atomic Bomb Medical Relief Law. The government then began to provide allowances to survivors with the disease.

Mr. Hatanaka and his daughter were often the subject of both domestic and international media coverage. They attended peace rallies to talk about their experiences and persistently conveyed the horror of the atomic bombing. After his health declined, Mr. Hatanaka retired to private life. His last public appearance was with Yuriko in 2005, at a birthday party held in Hiroshima for members of the Mushroom Club. Tomoko Saito, 47, an actress and member of the club, stressed, “Though we have lost the backbone of our group, we now must carry on his legacy.”

Many in Hiroshima and Yamaguchi lament the passing of Kunizo Hatanaka

Kunizo Hatanaka, who sought to convey the anguish of the atomic bombing, has died at the age of 92. His second daughter, Yuriko, suffers from microcephaly caused by prenatal exposure to the atomic bombing. Mr. Hatanaka founded and became the first chairperson of the Mushroom Club, a group for microcephalic patients and their families, and he was actively engaged in supporting A-bomb survivors. Many people in Hiroshima and Yamaguchi Prefectures have expressed their condolences at his passing.

Toshihiko Akinobu, 73, a staff member of the Mushroom Club, said, “He was a father to all the children of our group. We have lost an important person.” Sugako Murakami, 63, a member of the club and professor at Prefectural University of Hiroshima, recalled, “He was on a mission to make Yuriko’s disabilities known to the world. He stood up against injustice. From his outlook, I learned how I should live as a human being.”

The Mushroom Club currently has 18 members. Naomasa Hirao, 45, director of the planning department of the RCC Broadcasting Co., Ltd., has been involved in supporting the club’s activities. “Some of the patients in the group have lost their parents and are now on their own,” said Mr. Hirao. “The challenge we face is how to continue providing them with support.”

Yasuko Isono, superintendent of education in Iwakuni, produced a documentary on Mr. Hatanaka and Yuriko when she worked for a TV station some 30 years ago. “It is because of Yuriko that I go on and keep alive my hope for peace,” she recalls him regularly saying.

Saeko Ueno, 60, a staff member of Yudaen, a prefectural social welfare center for A-bomb survivors, holds a vivid memory of Mr. Hatanaka and his daughter. In 1981, when Peoples Tribunals were held in three places, including the city of Yamaguchi, calling for the enactment of the Atomic Bomb Survivors Relief Law, the Hatanakas attended all three tribunals and appealed for the abolition of nuclear weapons. Ms. Ueno believes that Mr. Hatanaka felt a deep determination to prevent the recurrence of war.