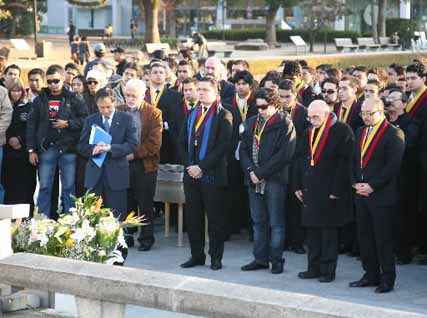 The Simon Bolivar Youth Orchestra (SBYO), a Venezuelan orchestra which has helped keep children away from crime by involving them in music, offered prayers at Hiroshima Peace Memorial Park before holding a concert in Hiroshima on December 19. It was the group’s first tour of Japan and its members had expressed a strong desire to visit the A-bombed city. Their experience of Hiroshima apparently deepened their thoughts for peace.

Roughly 250 people, including conductor Gustavo Dudamel, 27, who is also active in Europe, as well as other members of the SBYO in their teens and twenties offered a silent prayer before the Cenotaph for the Atomic Bomb Victims. Among them was Martha Argerich, 67, an internationally renowned pianist, who will costar in the concert.

A 24-year-old French horn player in the orchestra remarked, “Standing in the place where the atomic bomb was dropped, it takes my breath away. I’ll do my best to perform with a prayer for peace this evening.”

In Venezuela, a system that provides children in need with music opportunities as a means of preventing them from becoming involved in crime has proven to be a great success. The SBYO, the flagship of this system, often appears in prominent music festivals, winning applause from the world.