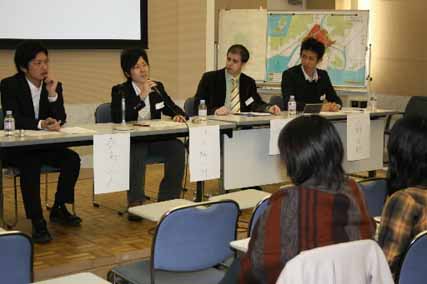 The Japan-America Student Conference, located in Tokyo, which conducts exchanges between students in Japan and the United States, held a forum addressing the abolition of nuclear weapons at Hiroshima Peace Memorial Museum on December 23. The aim of the event was to transmit a message of peace from the A-bombed city by overcoming differences in historical perspective between Japan and the United States in regard to the atomic bombings.

Roughly 40 university students from both countries participated in the event. Kazumi Mizumoto, associate professor at the Hiroshima Peace Institute of Hiroshima City University, gave the keynote speech and stressed, “To abolish nuclear weapons, it is essential to be equipped with an international perspective which transcends differences of national interest and ethnicity.”

A panel discussion with four students followed the speech. Koichiro Kawaguchi, 22, a senior at the University of Tokyo who attended high school in the United States, pointed out, “While voices in the U.S. which justify the atomic bombings are deep-seated, the anti-war movement is also active. Nurturing this movement, in collaboration with Japan, could lead to the abolition of nuclear weapons.” Joshua Schlachet, 26, a Fulbright Fellow from the United States at Kagoshima University, added, “The citizens of Japan and the United States should join hands to appeal for the elimination of nuclear weapons, including depleted uranium munitions.”

The Japan-America Student Conference has been conducting exchange programs since 1934. This year, 62 students lived together in four cities in the United States this past July and August and planned the event to help expand the dialogue over nuclear weapons.