A-Bomb Exhibition in Iran to be held this fall 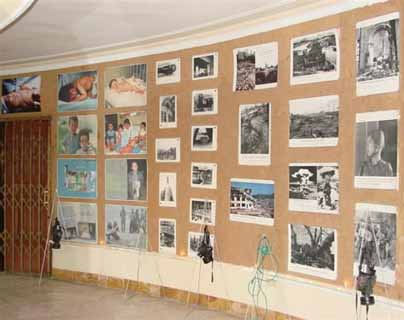 An A-bomb Exhibition in Iran, with the participation of A-bomb survivors, will be held this fall in the capital of Tehran amid the nation’s deepening international isolation due to its nuclear development program. The exhibition will be organized by a Hiroshima-based NPO, in collaboration with an Iranian organization providing support to poison gas sufferers, with the cooperation of Hiroshima Peace Memorial Museum. The event is designed to appeal for the abolition of weapons of mass destruction.

MOCT, an international organization providing medical support, is the Hiroshima NPO organizing the exhibition. Its plan calls for the event to be held over a period of two weeks in October-November 2009 at Tehran Peace Museum in Tehran City Park.

Panels featuring photographs and explanations in Persian, to convey the devastation wrought by the atomic bombing, will be displayed. Two survivors will share their experiences of the bombing and documentary films will also be shown. Senior officials of the Iranian government will be invited to attend.

Hiroshima Peace Memorial Museum will provide support by lending and transporting materials for the event, including peace drawings by children from Hiroshima. Museum staff will also supervise the Persian text. Koichiro Maeda, director of the museum, revealed his hopes for the exhibition, saying, “For the Iranian people to understand the devastation caused by the atomic bombings is very significant, considering the international attention the country has been receiving over its nuclear program.”

Shizuko Tsuya, the president of MOCT, visited Iran in 2004 as a member of the Hiroshima World Peace Mission, which was organized by the Hiroshima International Cultural Foundation and supported by the Chugoku Shimbun.

Prompted by this visit, she began an exchange program with the Society for Chemical Weapons Victims Support (SCWVS) in Iran. Since August 2004, MOCT has been inviting poison gas sufferers attacked in the Iran-Iraq War (1980-1988) to the Peace Memorial Ceremony held in Hiroshima each year. The Tehran Peace Museum is operated by the SCWVS.

MOCT considered holding the A-Bomb Exhibition in Iran two years ago, but it decided to postpone this plan, due to feelings of bitterness toward Iraq and the United States on the part of poison gas sufferers. The group was also concerned that the Iranian government might curb their exchange activities.

In regard to the new timing for the exhibition, President Tsuya remarked, “I believe the spirit of reconciliation on the Iranian side has grown through our exchange activities over the past several years. We decided to go ahead after gaining the trust of the Tehran city authorities.”

Keywords
Tehran Peace Museum
The poison gas victims who visited Hiroshima Peace Memorial Museum learned the importance of passing on their experiences to future generations. After returning to Iran, they urged the city of Tehran to found a facility for this purpose. The Society for Chemical Weapons Victims Support (SCWVS), an NGO based in Iran, established the museum after the city of Tehran donated the building to the organization. The museum exhibits photographs brought back from Hiroshima depicting the ruin wrought by the atomic bombing as well as images of poison gas damage. It will undergo renovation work before the A-Bomb Exhibition is held this fall.