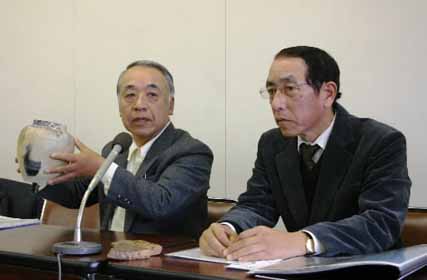 The Hiroshima Prefectural Confederation of A-bomb Sufferers Organizations, chaired by Kazushi Kaneko, will send two A-bomb survivors (hibakusha) to the A-bomb Exhibition in Kuala Lumpur, Malaysia set for January 13~18. Seiji Takato, 68, of Hiroshima City, who was exposed to the “black rain” which fell in the immediate aftermath of the bombing, and Tomiaki Nagahara, 62, a second generation A-bomb survivor from Kure City, held a news conference at Hiroshima City Hall on January 7, expressing their hopes for the trip to Malaysia.

The Japan Council against Atomic and Hydrogen Bombs is organizing the A-bomb Exhibition and the Malaysian government, which has taken a proactive stance for the abolition of nuclear weapons, is providing support. A Malaysian NGO, for which former Prime Minister Mahathir Mohamad serves as president, will host the survivors.

Photo panels depicting the reality of the atomic bombing, made by the Japan Confederation of A- and H-bomb Sufferers Organizations and other entities, will be displayed at International Islamic University Malaysia, which serves as the venue. The two hibakusha will visit the country with A-bomb artifacts lent by acquaintances and will participate in gatherings at the venue, at local schools, and at other sites. They also plan to meet with former Prime Minister Mahathir Mohamad.

Mr. Takato, who is involved in a campaign to expand the designated areas of black rain damage, said, “I hope to fully convey the horror of nuclear weapons, not only in terms of the direct damage of the atomic bombing, but also the internal effects of radiation exposure on the human body.” Mr. Nagahara, planning to speak about his father who passed away eight years ago without sharing his experience of the bombing to anyone, added, “I would like to communicate for my father by sharing the reality of the atomic bombing and the tragedy brought by war.”