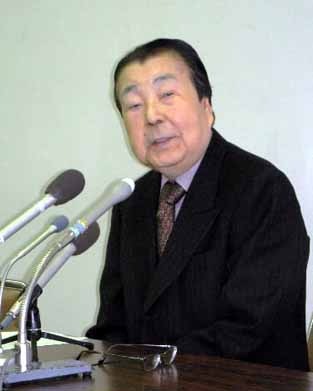 Akihiro Takahashi, 77, former director of Hiroshima Peace Memorial Museum, has written a letter to U.S. President-elect Barack Obama inviting him to visit the A-bombed city. Mr. Takahashi will request that Speaker of the House Nancy Pelosi--like Mr. Obama, a Democrat--deliver the letter. Mr. Takahashi and Speaker Pelosi met on the occasion of the G8 Summit of Lower House Speakers held in Hiroshima in September 2008.

Mr. Takahashi held a press conference at Hiroshima City Hall on January 8 in which he outlined the contents of the letter. He expressed high hopes for Mr. Obama’s nuclear policy, noting that the President-elect has appointed, as his science advisor, a person who supports the abolition of nuclear weapons. In the letter, Mr. Takahashi asks Mr. Obama to visit Hiroshima Peace Memorial Museum and listen to the voices of A-bomb survivors, saying “Your visit would begin a new era for humanity.”

Last November Mr. Takahashi received a letter of appreciation from Speaker Pelosi for having shared his experience of the atomic bombing at the time of the Speakers’ Summit. After encouragement from others, who told him “you now have a channel for communicating with Mr. Obama,” he decided to contact Speaker Pelosi to request that she forward his letter. He plans to send the letter to her as soon as the English translation has been completed.

Mr. Takahashi added hopefully, “If Mr. Obama visits Hiroshima, I will appeal to him to promote the elimination of nuclear arms for the future, rather than expressing bitterness about the past.”

It is my great pleasure to congratulate you on your inauguration as the 44th president of the United States on January 20, 2009.

Please allow me to briefly introduce myself. I am an A-bomb survivor, living in Hiroshima, Japan with my wife. My name is Akihiro Takahashi. At the age of 77, I am now retired from my service in the Hiroshima City Office. During several decades of service to the City, I served for a time as Director of the Hiroshima Peace Memorial Museum.

Currently, I am struggling with chronic hepatitis and many other diseases that are aftereffects of radiation. Despite these illnesses, I continue telling students--elementary, junior high and senior high school students from various parts of Japan--about my own experience as an A-bomb survivor, along with my earnest desire to foster world peace. In addition to students visiting Hiroshima on school excursions, I sometimes tell my stories to people in other cities, including overseas.

I was 14 (in my 2nd year of junior high school), when the bomb was dropped on Hiroshima. On that morning, I was in the playground of my school, which was 1.4 km away from ground zero. Suffering serious burns on at least one-third of my body--the backside of my head, my back and all four limbs, I began walking toward my home. On the way, I happened to see my great uncle and aunt, who helped me return home. Without their help, I could not have survived the calamity. After struggling with the burn injuries and effects of radiation for a year and a half, I barely escaped death. Out of 60 classmates, only 14, including myself, survived the disaster.

Mr. President, I am writing this letter to ask you a favor. Please visit Hiroshima and the Hiroshima Peace Memorial Museum. I would be most grateful and honored if you would hear the story of my experience as an A-bomb survivor along with my sincere wishes for world peace. I strongly believe that your visiting Hiroshima would be a great step towards the realization of the total abolition of nuclear weapons from our planet. Rather than reproaching past incidents and triggering disputes that would take us nowhere, I firmly believe that we should make your visit to Hiroshima the beginning of a new age of reconciliation for all humankind.

It was my great pleasure to tell my story and appeal for world peace to Ms. Nancy Pelosi, the Speaker of the United States House of Representatives, when she visited Hiroshima in September 2008 to attend the G8 Speakers’ Meeting Hiroshima 2008. I will never forget her kind remarks about me, especially one that is more than I deserve: “Mr. Takahashi is beautiful.” It is my sincere hope that I will have yet another opportunity to tell my story, next time to you, Mr. President, in person.

Of all the mayors of Hiroshima, the present mayor--Dr. Tadatoshi Akiba--is outstanding; I truly respect and trust in him. I know that Mayor Akiba is eager to meet you and would celebrate your visit. It would be a great pleasure and honor for us to welcome you here in Hiroshima, a President who, according to the newspaper, has gained the enthusiastic support of more than 80% of U.S. citizens.

Since the time of President John F. Kennedy, I have long cherished a particular interest in and high expectations for the Democratic Party. I was excited when you were elected as the 44th president. I was particularly happy when you selected Professor John Holdren of Harvard University as your science advisor. I understand that by nominating him, you have manifested to the world your firm decision to dynamically promote nuclear disarmament. I greatly appreciate and value your decision, and expect that you and Professor Holdren will exert your combined leadership in promoting nuclear disarmament.

In this letter, I have called you “Mr. President.” Yet, I honestly want to call you, if I may, “Obama-san” (Mr. Obama), since I feel a strong affinity with you. Please forgive me if this statement sounds rude.

In concluding, I would like to express my sincerest wishes for your continued good health and success in global politics.

Thank you very much for your kind reply to my letter dated October 31, 2008. I felt truly grateful and honored to receive a letter from you despite your busy schedule.

On behalf of all A-bomb survivors, I would like to thank you for your efforts to foster world peace. We are indeed encouraged by your commitments to and enthusiasm for this matter.

I am writing this letter to ask you a favor as the Speaker of the House. Enclosed herewith please find my letter to President Obama. In this letter, in addition to congratulating him on his inauguration as the 44th president, I am asking him to visit Hiroshima and, if possible, listen to my story as an A-bomb survivor, along with my earnest wishes for world peace. I would be most grateful if you could kindly hand the letter to President Obama with a few words about my wishes for his visit.

I strongly believe that his visiting Hiroshima would be a great step towards the total abolition of nuclear weapons from the Earth. Rather than reproaching past incidents and triggering disputes that would take us nowhere, I believe that we should make his visit the beginning of a new age of reconciliation for all humankind.

The Mayor of Hiroshima City--Dr. Tadatoshi Akiba, in whom I have great trust--is also planning to invite President Obama to Hiroshima, a plan prepared in conjunction with other members of the World Conference of Mayors for Peace. I would be truly grateful if you would kindly bring this plan to President Obama’s attention.

Finally, I would like to express my heartfelt wishes for your continued good health and prosperity.