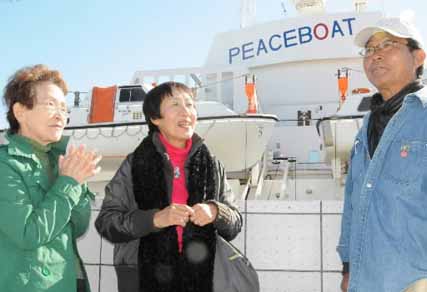 A large ship with A-bomb survivors (hibakusha) on board, organized by Peace Boat, a Tokyo-based NGO, returned to Harumi Port in Tokyo on January 13 after a 129-day around-the-world voyage. After a number of opportunities to share their experiences of the atomic bombing with people at 23 locations in 20 countries and regions, the participants have renewed their resolve to work for the abolition of nuclear weapons.

Toshiko Tanaka, 70, a cloisonne artist, experienced the atomic bombing while at home in Hiroshima 63 years ago. She shared her account of the bombing for the first time in her life while on the voyage. Though Ms. Tanaka was surprised by her encounters with people who were unaware of the true destruction caused by the atomic bombing, she felt encouraged by a soldier in Venezuela who told her, “The strongest weapon in the days ahead is peace.” Ms. Tanaka added, “In the coming years, I plan to visit more places in the world to convey my experience.”

A total of 103 A-bomb survivors who endured the atomic bombings of Hiroshima and Nagasaki took part in the voyage. Together with other passengers, they left Yokohama port in September 2008 and participated in various exchange opportunities, such as interacting with victims of Agent Orange defoliant in Vietnam and relating their testimonies at the United Nations Headquarters in the United States. The duration of the voyage was extended for about one month when the ship they first boarded experienced mechanical trouble, forcing the passengers to change vessels.

Some of the participating hibakusha will visit Hiroshima City Hall in late January to deliver the documents for membership to Mayors for Peace, which they received during the voyage from about 30 municipalities. Peace Boat is planning a second voyage with A-bomb survivors this summer.