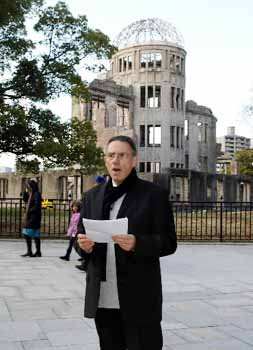 Guy Crequie, 65, a French poet and the French representative of the International Forum for Literature and Culture, visited the Atomic Bomb Dome on January 13. He offered flowers at the monument of Tamiki Hara, a writer noted for his works about the atomic bombing, and interacted with local poets.

While active as a poet and writer, Mr. Crequie has been involved in peace activities, including serving as a peace messenger for the United Nations Educational, Scientific and Cultural Organization (UNESCO). When Japan and France observed their 150th anniversary of diplomatic relations in 2008, he felt inspired to gain a deeper understanding of what really happened in Hiroshima. Thus, he arrived in Japan on January 8 for the first time.

“We mustn’t forget the preciousness of life, especially now with conflicts continuing around the world,” Mr. Crequie said. “Hiroshima is the symbol for this idea.” Also a tenor singer, he sang “Ave Maria” in front of the A-bomb Dome and prayed for peace as well as the repose of the victims’ souls.

On the evening of January 13, Mr. Crequie met with about 20 people, including local poets. On January 15, he will speak with Steven Leeper, Chairman of the Hiroshima Peace Culture Foundation.