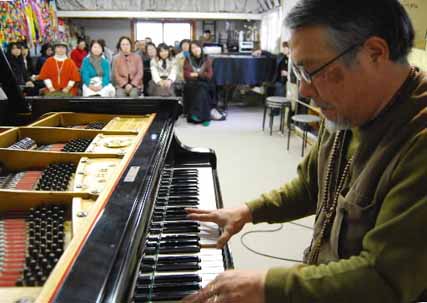 Ichijo Yoshii, 62, a jazz pianist living in Sakaide City, Kagawa Prefecture, has resumed his performance activities after encountering an A-bombed piano. Mr. Yoshii, whose given name is Toshihiko, is originally from Higashi Ward, Hiroshima. He held a piano concert with an A-bombed piano at Yagawa Piano Kobo Craft Center in Asaminami Ward on January 10. Based in Shikoku, Mr. Yoshii is now enlarging the circle of people showing interest in A-bombed pianos, after hiding, in the past, the fact that he suffered prenatal exposure to radiation from the atomic bombing of Hiroshima.

Mr. Yoshii chooses the pieces he is going to play as he performs at a concert venue. On that day, he played about 20 pieces, including jazz, popular music, and children’s songs, such as “My Way” and “I Am a Thousand Winds.” Prior to his performance, he shared his personal experience with the roughly 30 people in the audience, explaining that he had been born an A-bomb survivor.

The grand piano he played for the concert was assembled around 1910 and had been owned by Toshio Tanaka, who was a music instructor. Mr. Tanaka was born in Kure City and passed away in 1998 at age 89. At the time of the atomic bombing, the piano was located at an elementary school in Nishi Ward, about two kilometers from the hypocenter, and was badly damaged in the blast. After the war, Mr. Tanaka restored it to good condition with the help of a piano craft center in Hiroshima and resumed playing it. Five years ago, Mitsunori Yagawa, 56, a piano tuner who runs a piano craft center, took over the piano from a student of Mr. Tanaka after his death.

“The soul of a pianist who was killed in the atomic bombing and unable to play the piano had settled in my heart. That is why I have begun performing again,” Mr. Yoshii said, referring to the first time he played an A-bombed piano at a welfare center in Sakaide City in March 2008.

In October 2007, Mr. Yoshii’s father, Hiroshi, 89, shared his experience of the atomic bombing for the first time in his life at a Sakaide elementary school. Prompted by the event, “The Association of Atomic Bomb Sufferers in Sakaide” was established five months later. The association then decided to hold a piano concert with an A-bombed piano and Mr. Yoshii was asked to perform.

Mr. Yoshii was in his mother’s womb, in her fourth month of pregnancy, when the atomic bomb was dropped. His mother, Fumie, was approximately 2.5 kilometers from the hypocenter at the time.

After he grew up, Mr. Yoshii enjoyed playing jazz at the Light Music Club at Hiroshima University. Upon graduation, he began to earn a living as a jazz pianist, traveling throughout the country with a band. Just before he turned 50, he settled in Sakaide, his parents’ hometown. But he lost enthusiasm for playing the piano due to performances alone at the same club each night. When his mother passed away two years ago, he shut himself away at home and even stopped playing his own piano. In these circumstances, he encountered the A-bombed instrument.

On August 6, 2008, Mr. Yoshii formed a group called the “Association of People for A-bombed Pianos.” The group now has 250 members with most living in Kagawa Prefecture. Mr. Yoshii’s father, Hiroshi, has continued sharing his experience of the bombing and covers the group’s running costs.

“A tremendous number of people died in Hiroshima, but I managed to survive,” Mr. Yoshii said, after his performance in Hiroshima. “I am resolved to devote the rest of my life to performing on A-bombed pianos.”