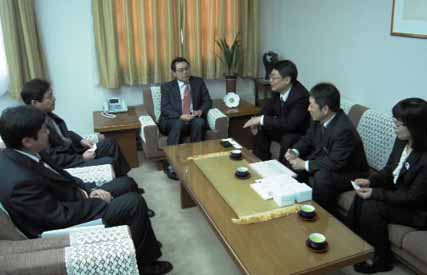 Following the revision of the Atomic Bomb Survivors Relief Law, which now enables A-bomb survivors (hibakusha) living abroad to apply for Atomic Bomb Survivor’s Certificates while overseas, two officials from the City of Hiroshima visited South Korea on January 15. The trip marks the first time officials from Japan are traveling outside the country to interview applicants abroad. On January 16, the two officials will begin conducting interviews of six hibakusha residing in South Korea who have applied for the certificate.

Akimi Nakamura, director of the Qualification Division of the Atomic Bomb Survivors Relief Department of Hiroshima City Office and another official, along with an interpreter, arrived in Busan, South Korea via Fukuoka Airport. They discussed anticipated challenges and other issues in regard to the application procedure with Consul General Shuitsu Tamitsuji and his staff at the Consulate-General of Japan in Busan, one of the locations for filing applications in South Korea.

The interviews will be conducted between January 16 and 19 at the applicants’ homes or at the institutions where they are cared for in Hapcheon-gun, Gyeongsangnam-do. The officials will meet two male applicants and four female applicants between the ages of 67 and 99 and confirm such information as the circumstances of their exposure to the atomic bombing.

“We have finally arrived at the stage where we can provide the certificates to people who were unable to visit Japan,” Mr. Nakamura said. “They suffered hardship for many years, despite the fact that their experience of the atomic bombing had already been confirmed.”

After the revised Atomic Bomb Survivors Relief Law took effect in December 2008, the formal operation of the new system has begun in which Japanese officials travel abroad, if necessary, to implement screening procedures for the Atomic Bomb Survivor’s Certificate. Since considerable time is required to travel from Japan to the countries where applicants reside, and current procedures impose a heavy burden on the part of the A-bomb survivors as well, calls are being heard to simplify the screening process.

Under the law, the Ministry of Health, Labor and Welfare obliges both new applicants and applicants who have already obtained the Atomic Bomb Certificate of Acknowledgement to undergo a personal interview in the country where they live. The governments of Hiroshima Prefecture, Hiroshima City, Nagasaki Prefecture, and Nagasaki City carry out the screening procedures--in each case, the particular applicant determines which government becomes involved--and travel expenses are shouldered by the Japanese government.

However, supporters of hibakusha overseas have voiced criticism of this system, arguing, “Applicants who are gravely ill must wait for Japanese officials to come conduct interviews. Is it necessary for the Japanese side to take so much time and trouble to visit the countries where the survivors live?” A Hiroshima city official responded to this complaint by saying, “In order to issue the certificate as quickly as possible, we are discussing these matters in question with the Ministry of Health, Labor and Welfare. We are hoping to consider a flexible approach, such as omitting interviews with applicants who are less likely to require this provision.”

After conducting hearings with A-bomb survivors’ organizations in North America, South America, and South Korea, the four local governments have estimated that, in the years to come, they will receive a total of 155 new cases, as well as 32 cases which involve applicants who have already been issued the Atomic Bomb Certificate of Acknowledgement. Due to their personal circumstances, such as those suffering from dementia, many are unable to prove that they experienced the atomic bombing or have difficulty finding witnesses. The South Korean Atomic Bomb Sufferers Association stresses, “In the screening procedures, special consideration is requested for the A-bomb survivors who have been neglected for so many years.”