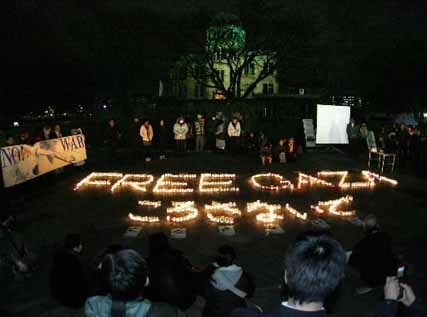 On the evening of January 16, like-minded citizens of Hiroshima gathered in front of the A-bomb Dome to protest the air raids and advance of ground troops into Gaza by Israeli forces. They lined up lit candles in the shape of a message calling for an immediate ceasefire.

The event was organized by a group of local peace activists, for which Mitsuo Okamoto, professor emeritus at Hiroshima Shudo University, and three others served as joint representatives. About 200 people participated, bringing along their own candles. The message made by candlelight read: “FREE GAZA. NO KILLING.” Masaki Uno, a professor at Hiroshima City University who has worked at the Japanese Embassy in Israel, emphasized, “We must raise our voices against this attack instead of ignoring it.”

On the same day, Mayors for Peace, for which Hiroshima Mayor Tadatoshi Akiba serves as president, issued a statement calling for a complete and immediate ceasefire and international intervention in Gaza.