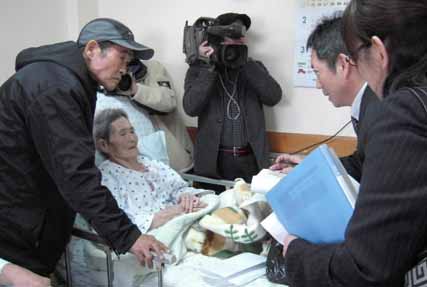 “It pains me that the Atomic Bomb Survivor’s Certificate could not be issued to you, even though the city had confirmed the fact of your exposure to the atomic bombing,” Mr. Nakamura told Ms. Cheong. After confirming her identity, he checked such information as the circumstances of her exposure to the atomic bombing by reading aloud the entries in her application documents. Standing next to a tearful Ms. Cheong, her eldest son Kang Seok Jong, 69, remarked, “Although it took a long time to reach this result, I am grateful to you for coming this far.”

The two officials also visited the Hapcheon A-bomb Sufferers Welfare Center to conduct hearings in regard to the difficulties faced by hibakusha in obtaining the Atomic Bomb Survivor’s Certificate. They are conducting interviews with six applicants, including those living in Busan and Seoul, until January 19. The Atomic Bomb Survivor’s Certificate is expected to be issued promptly to the six applicants, upon the officials’ return to Japan, as all these survivors were already in possession of the Atomic Bomb Certificate of Acknowledgement.