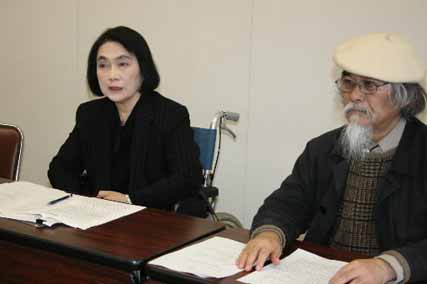 The Hiroshima Alliance for Nuclear Weapons Abolition, a Hiroshima-based citizens’ group, has announced that they sent a letter to President Obama asking him to promote the abolition of nuclear weapons as well as visit Hiroshima. Haruko Moritaki, co-chair of the organization, and others held a press conference on January 22 at Hiroshima City Hall to report on the letter.

The letter says that “The people of Hiroshima particularly identify with your campaign promise to work for a ‘world without nuclear weapons,’” and calls for his initiative on behalf of nuclear abolition.

In addition, the letter asks him “to reconsider the US-India Nuclear Cooperation Agreement,” and to make the efforts by Mayors for Peace to abolish nuclear weapons by the year 2020 “pivotal components of the nuclear policy” of his administration. Finally, the letter ends by expressing a desire that “As the hibakusha have grown old, we long to see the total abolition of nuclear weapons from the world while they are still living.”

Ms. Moritaki remarked, “President Obama, by himself, can only do so much to realize the elimination of nuclear weapons. We hope that our message of solidarity from Hiroshima will offer him support in his efforts.”


To: The Honorable Barack Hussein Obama
44th President of the United States of America
From: Hiroshima Alliance for Nuclear Weapons Abolition (HANWA)

Our heartfelt congratulations from Hiroshima on your inauguration as President of the United States of America!

The Hiroshima Alliance for Nuclear Weapons Abolition (HANWA), an NGO based in Hiroshima seeking to build a peaceful, nuclear-weapons-free world, would like to express our hopes for your political and economic leadership of the United States and the world during your presidency and our wishes that freedom, human rights, and welfare for world citizens will be enhanced and that global peace and democracy will be greatly reinforced.

The people of Hiroshima particularly identify with your campaign promise to work for a “world without nuclear weapons,” which is critical to the survival of humankind.

The “change” that you have been advocating is an imperative not only for US citizens, but also for people around the world. Without such change, we can entertain no hope for the future.

The “War on Terror” carried out by the Bush administration without sanction by the United Nations simply aggravated the situations in Iraq and Afghanistan. It was far from a solution and even a British cabinet member has criticized it as a terrible blunder. The result was a further deterioration of the global situation, coupled with the world economic crisis. The first decade of the 21st century has seen significant retrogression in freedom, human rights, and welfare as well as a substantial depreciation of prosperity, peace, and democracy.

As citizens of Hiroshima, we are particularly worried by the proliferation of nuclear weapons, which have spread from the United States, Russia, the UK, France, and China to India, Pakistan, Israel, and North Korea. Now, Iran is suspected of clandestinely developing nuclear weapons. The holocausts in Hiroshima and Nagasaki have taught us that nuclear weapons are the most inhumane, terrible weapons of mass destruction ever developed, and this understanding is shared by the International Court of Justice, which has declared that they are incompatible with human rights. The abolition of these monstrous weapons is not only the fervent desire of the rapidly aging hibakusha (A-bomb survivors) of Hiroshima and Nagasaki, it is also the paramount responsibility of the United States as world leader. Unless the United States substantially reduces its nuclear arsenal with a view to eventually abolishing all nuclear weapons, further proliferation is inevitable.

First of all, we ask that you, President Obama, abide by your public pledge to produce no new nuclear warheads in the U.S.A. and promote ratification of the Comprehensive Nuclear Test Ban Treaty; in defense of the Nuclear Nonproliferation Treaty, reconsider the US-India Nuclear Cooperation Agreement; reduce tension between the U.S. and Russia by abandoning the deployment of missile-defense systems in Europe; immediately stop using depleted uranium weapons, which, like nuclear weapons, have brought serious harm due to radiation; abandon the nuclear first strike policy; and promise not to use nuclear weapons against non-nuclear states.

We welcome the proposal to abolish nuclear weapons presented by Dr. Henry Kissinger and colleagues in The Wall Street Journal in January 2007 and again in January 2008. At the same time, we support wholeheartedly the Hiroshima-Nagasaki Protocol announced in April 2008 by Dr. Tadatoshi Akiba, mayor of Hiroshima and president of Mayors for Peace in preparation for the “decisive decade,” the UN Decade of Disarmament (2010-2020). We urge you to take these proposals into serious consideration and make them pivotal components of the nuclear policy of your new administration, thus liberating the world from the threat of terrorist acquisition of nuclear weapons.

Last but not least, we ask that you withdraw all US troops from Iraq and Afghanistan and make every effort to stop all violent military operations in Gaza and elsewhere in Palestine. The entire human family desperately needs you to turn the power of the US toward building a genuinely peaceful world free from nuclear weapons and based on respect for human rights and freedom.

We sincerely hope that you will be the first US president to visit Hiroshima and that you will take strong action toward the elimination of nuclear weapons, thus making your presidency a truly historic one.