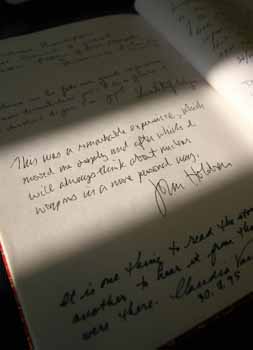 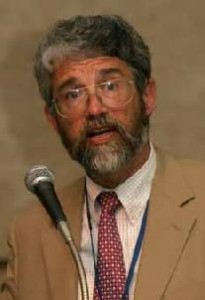 It has been learned that John Holdren, 64, aide for Science and Technology to President Obama, has visited the A-bombed city of Hiroshima. Mr. Holdren took part in the Pugwash Conferences on Science and World Affairs, an organization dedicated to the elimination of nuclear weapons, when their annual conference was held in Hiroshima in 1995 and 2005. He gave presentations at these conferences and left a message in the visitors’ book at Hiroshima Peace Memorial Museum. Mr. Holdren’s appointment as a presidential aide is thought to signify President Obama’s proactive ideas toward nuclear disarmament. In formulating the new president’s policies in this area, it is believed Mr. Holdren will play a significant role.

Before assuming this new post, Mr. Holdren served as professor of environmental policy at Harvard University. The Pugwash Conferences on Science and World Affairs, headquartered in London, writes on its website that Mr. Holdren’s participation in the organization first began with the conference held in 1973 and he went on to chair the Pugwash Executive Committee, from 1987, for ten years.

At the 1995 conference, the first to be held in the A-bombed city, Mr. Holdren took a leadership role in drafting the Hiroshima Declaration which appealed for “the abolition of nuclear weapons and the abolition of war.” In this same year of 1995, the Pugwash Conferences was awarded the Nobel Peace Prize. Mr. Holdren delivered the acceptance speech, entitled “Arms Limitation and Peace Building in the Post-Cold-War World,” on behalf of the organization.

Ten years later, at the second conference held in Hiroshima in 2005, Mr. Holdren gave a keynote address entitled “Aiming for Zero: The Trajectory Toward a Nuclear-Weapon-Free-World.” In this speech he proposed that the United States promote ratification of the Comprehensive Test Ban Treaty (CTBT) and negotiate with Russia to reduce the number of nuclear weapons. He also recommended that the non-nuclear-weapon states of Japan, Germany, and Brazil be made permanent members of the U.N. Security Council. “The aim of prohibiting nuclear weapons should be embraced,” he urged. “To realize this aim, the leadership of the United States and the support of the American public are essential.”

Shoji Sawada, 77, professor emeritus at Nagoya University and an A-bomb survivor, has shared his experience of the atomic bombing of Hiroshima at past Pugwash Conferences. Mr. Sawada commented, “President Obama provides hope that U.S. nuclear policy might change, as the positions he advocated during his presidential campaign include ratification of the CTBT. I believe that Mr. Holdren, who visited Hiroshima in person and grasps the reality of the atomic bombing, will play an important role at the Nuclear Nonproliferation Treaty (NPT) review conference to be held next year. I think the nuclear policy on the part of Japan will also be called into question.”