African trainees view Hiroshima as a model for reconstruction 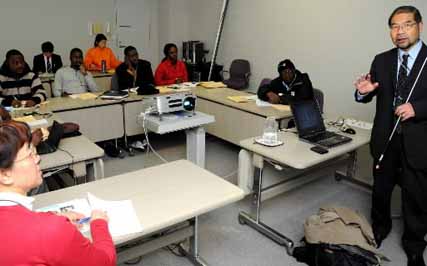 Local government officials from four African countries that have suffered conflicts attended a seminar at the Chugoku International Center of the Japan International Cooperation Agency (JICA) on January 26. They learned about the reconstruction of Hiroshima in the aftermath of the atomic bombing in order to support the process of development and peace building in their own nations.

Seven government personnel from Uganda, Sierra Leone, Liberia, and Rwanda, including a state governor and regional development staff, took part in a presentation by Norioki Ishimaru, a professor at Hiroshima International University who specializes in the history of city planning.

Professor Ishimaru explained that the Hiroshima Peace Memorial City Construction Law enacted in 1949 contributed to the acquisition of funds for Hiroshima’s reconstruction and related matters. He also pointed out that since most of the A-bombed buildings were demolished, Peace Memorial Park has become the chief site in Hiroshima for reflecting on the past and issues of peace.

Kamara Morlai Ptarick, 35, a finance officer from the Kambia District in the northern part of Sierra Leone, remarked, “I am impressed by the strong will of Hiroshima citizens to rebuild their city. I would like to make good use of what I’ve learned here, viewing Hiroshima as our model for an international city of peace.”

The seven trainees came to Japan on January 13 and have visited Peace Memorial Park and other sites. They will learn about such subjects as the Japanese taxation system and agriculture at JICA’s Chugoku International Center and other locations until February 13.