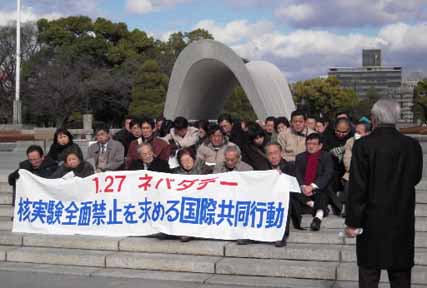 On January 27, the anniversary of the nuclear test conducted by the United States in the state of Nevada in 1951--so-called “Nevada Day”--A-bomb survivors from the Hiroshima Congress Against A- and H-Bombs and others organized a sit-in in front of the Cenotaph for the A-bomb Victims in Peace Memorial Park to call for a nuclear-weapons-free world.

About 75 people sat on the stone steps in front of the Cenotaph and Sunao Tsuboi, Chairman of the Hiroshima Prefectural Confederation of A-bomb Sufferers Organizations, emphasized, “Right now, we are at a crossroads where we must choose between nuclear proliferation or nuclear abolition. We should never give up in our quest to create a world free of nuclear weapons.” The participants adopted a statement calling for successful negotiations at the Nuclear Nonproliferation Treaty (NPT) Review Conference in 2010, among other appeals, and sent it to the U.S. Embassy in Japan and other organizations.

Also, on the same day, the Hiroshima Congress Against A- and H-Bombs sent a letter to U.S. President Obama urging him to close the nuclear test site in Nevada and to ratify the Comprehensive Test Ban Treaty (CTBT) as soon as possible.