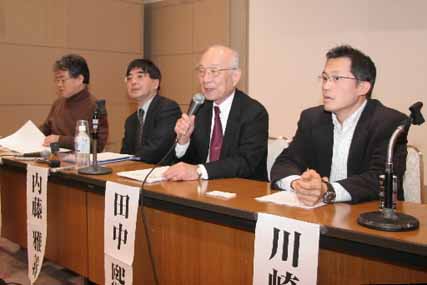 A new organization has been launched with the aim of conveying views to the International Commission on Nuclear Non-proliferation and Disarmament (ICNND), a joint initiative of the Australian and Japanese Governments. The organization, ICNND Japan NGO Network, will suggest policy ideas in order to spur practical proposals for the abolition of nuclear weapons. At the group’s inaugural meeting held in Tokyo on January 25, it was announced that some A-bomb survivors will speak about their experiences of the atomic bombings at the ICNND meeting scheduled for February in the United States.

The organization was established in response to calls by eight Japanese groups, among them the Hiroshima Alliance for Nuclear Weapons Abolition (HANWA), the Nagasaki Global Citizens’ Assembly for the Elimination of Nuclear Weapons, and Peace Boat. At the first meeting, four people, including Terumi Tanaka, secretary general of the Japan Confederation of A- and H-Bomb Sufferers Organizations (Nihon Hidankyo), were appointed joint representatives.

The group will send an open letter to the ICNND on February 6 sharing the group’s hopes and wishes in English. For the ICNND meeting planned for February 13~15 in Washington D.C., they will send three A-bomb survivors, including Mikiso Iwasa, the assistant general secretary of Nihon Hidankyo who experienced the atomic bombing of Hiroshima. Fundraising for this dispatch will begin soon.

The ICNND is an expert commission established as a joint initiative of the two governments. It is co-chaired by former Japanese Foreign Minister Yoriko Kawaguchi and former Australian Foreign Minister Gareth Evans. Its 15 members are from the United States, Russia, India, Pakistan, and other nations and their first meeting was held in Sydney in October 2008.

Mr. Tanaka is calling for the ICNND to compile its report with a deep understanding of how inhumane nuclear weapons are, saying that this understanding should lay not only in their heads but also in their hearts by listening to the voices of the A-bomb survivors.

After the organization’s inaugural meeting, a commemorative symposium was held with five panelists including Nobuyasu Abe, former UN Under-Secretary General for Disarmament Affairs, and Akira Kawasaki, ICNND advisor and a member of Peace Boat’s executive committee.

ICNND’s final meeting to be held in Hiroshima in October

It was learned on January 26 that the International Commission on Nuclear Non-proliferation and Disarmament (ICNND) will hold its fourth and final meeting in Hiroshima in October 2009. ICNND is an expert commission and a joint initiative of the Australian and Japanese Governments. This purpose of this commission is to discuss the means for achieving a nuclear-weapons-free world. An in-depth discussion will take place in the A-bombed city and the group will compile a report on effective measures for promoting nuclear abolition.

ICNND held its first meeting in Sydney, Australia in October 2008. It will hold another meeting in Washington D.C. in February and again in Moscow in June. It is now making preparations for its fourth meeting to be held in Hiroshima in mid-October. On January 16, the City of Hiroshima sent a letter to the Foreign Ministry of Japan urging that ICNDD hold its last meeting in Hiroshima.

ICNND consists of 15 members from the U.S., Russia, India, Pakistan, and other countries, and is co-chaired by former Japanese Foreign Minister Yoriko Kawaguchi and former Australian Foreign Minister Gareth Evans. It will compile a report, which includes specific recommendations, prior to the Nuclear Non-proliferation Treaty Review Conference scheduled for May 2010.

In the meeting to be held in the U.S. from February 13~15, a “hibakusha session” is part of the group’s agenda with three survivors, including Mikiso Iwasa, assistant general secretary of the Japan Confederation of A- and H-Bomb Sufferers Organizations, speaking about their experiences. The final meeting slated for Hiroshima will provide an even more powerful opportunity to send a message of nuclear abolition to the world and envision appropriate measures based on the true devastation wrought by nuclear weapons.