Grandparents of new U.S. Secretary of Veterans Affairs are originally from Hiroshima 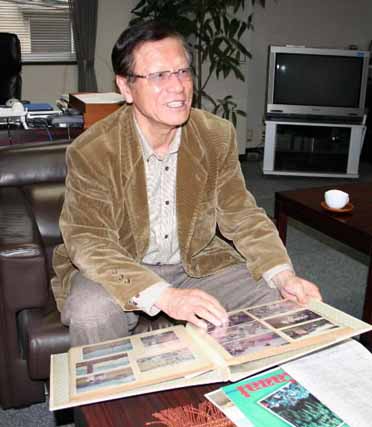 Eric Shinseki, 66, who has assumed the post of Secretary of Veterans Affairs in the Obama administration, is a third-generation Japanese-American. All four grandparents on both his mother’s and father’s side of the family are originally from Hiroshima Prefecture. Giichi Neishi, 73, a second cousin to Mr. Shinseki, expressed his support of the new secretary and said on January 21, “As a secretary with a connection to Hiroshima, I hope that Mr. Shinseki will contribute to making a more peaceful world.” Mr. Neishi lives in Kaita, a town near Hiroshima City, and is the chairman of Yours Co. LTD, a major supermarket chain in Hiroshima.

The news that Eric Shinseki was appointed Secretary of Veterans Affairs by Mr. Obama was relayed to Mr. Neishi from a relative living in Hawaii. The late Gisaburo Ishii, the elder brother of Mr. Neishi’s grandfather, and his wife emigrated to Hawaii around 1901. Their daughter married the son of an immigrant couple from Hiroshima, named Shinseki, and gave birth to Eric Shinseki. David Ishii, 53, a well-known professional golfer, is a first cousin to Mr. Shinseki.

Eric Shinseki chose to be a military man, eventually becoming the Army Chief of Staff. He expressed a critical view of the Iraq policy under the Bush administration and even confronted then Secretary of Defense Donald Rumsfeld over the Iraq war. However, for the Obama administration, Mr. Shinseki was handpicked to head the Department of Veterans Affairs, the agency tasked with supporting U.S. veterans, including returning veterans from Iraq and Afghanistan.

Mr. Neishi visits Hawaii regularly and has socialized with the family of the new secretary for many years, though the opportunity to meet Mr. Shinseki in person arose only once, 35 years ago. Recalling this encounter, Mr. Neishi said, “I was left with the impression that Mr. Shinseki is family-minded and a man of integrity.” Although Mr. Shinseki has never visited Hiroshima, Mr. Neishi added, “I hope he will come to Hiroshima someday, his grandparents’ hometown.”