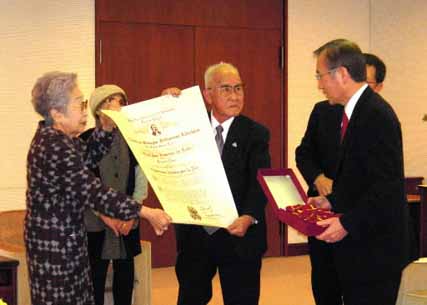 Thirty-six people from among 103 A-bomb survivors (hibakusha) who took part in a global voyage organized by Peace Boat, a Tokyo-based NGO, visited Hiroshima Mayor Tadatoshi Akiba on January 28. They handed registration forms for Mayors for Peace to Mayor Akiba, who serves as the organization’s president, from 27 cities, including cities where they made port calls during their 129-day voyage.

The hibakusha told of the fruitful results of sharing their experience of the atomic bombings in 23 cities in 20 countries and regions. They also reported to Mayor Akiba that several cities in Venezuela, the Spanish autonomous community of the Canary Islands, and other areas, have expressed their desire to become members of Mayors for Peace.

The Venezuelan capital of Caracas entrusted to hibakusha an “Honorary Award” for the efforts of Mayors for Peace. Mayor Akiba thanked them for their hard work, saying, “Because you are speaking to people directly, I believe the citizens of the world have begun to listen to the voices that call for the abolition of nuclear weapons.”

Takashi Morita, 84, chairman of the Peace Association of Brazilian A-bomb Survivors and one of the participants, remarked, “I discovered that there are still many people in the world who don’t really know what happened in Hiroshima. I feel keenly that we must pass on our experiences to future generations.”