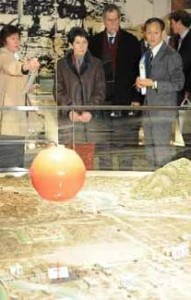 Barbara Prammer, President of the Austrian Parliament, has visited Hiroshima to learn about the damage wrought by the atomic bombing. Ms. Prammer is visiting Japan through the invitation of the House of Representatives of Japan to commemorate the 140th anniversary of diplomatic relations between Japan and Austria.

Ms. Prammer, along with ten members of the parliament, was guided by Museum Director Koichiro Maeda through Peace Memorial Museum. With a pained look, she studied such exhibits as photographs depicting victims of the bombing who were severely burned and some stone steps that were imprinted with the shadow of the person who had been sitting there. Ms. Prammer felt inspired to come to Hiroshima after reading a book written by Austrian writer Karl Bruckner about Sadako Sasaki called “Day of the Bomb.” Sadako was a girl who was exposed to the bombing at the age of two and died from leukemia at the age of twelve and Mr. Bruckner’s book has contributed significantly to spreading Sadako’s story throughout the world.

Ms. Prammer also went to see the Children’s Peace Monument, a memorial that was raised in response to Sadako’s death. In her comments to the media, Ms. Prammer expressed her determination to take a leadership role in preventing the proliferation of nuclear weapons and realizing the abolition of weapons of mass destruction. “It is our duty to create a world free of nuclear weapons,” she said. “We must strive to bear in our minds the horror of nuclear weapons and war.”

Ms. Prammer will also visit Kyoto and other locations before leaving Japan on January 31.