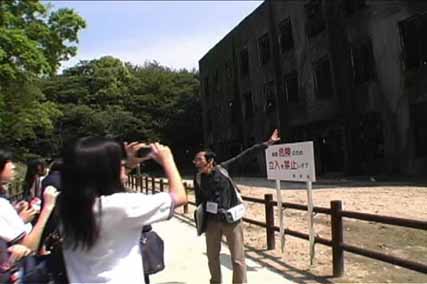 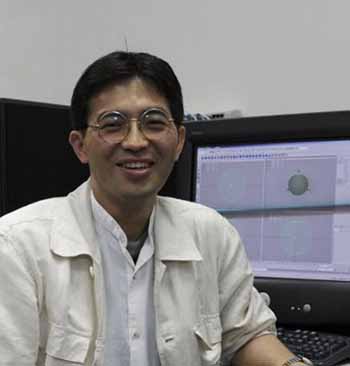 “Messages” was created over a period of about six months and includes interviews with people who engaged in the production of poison gas and others who are involved in conveying the facts of this history. The film was made with the conviction that “by looking back at history, we shall not repeat the same mistake.”

The 33-minute film features such scenes as a message delivered by Shizuyo Yamauchi, 60, the head of the island’s research institute and her husband Masayuki, 64, guiding students on a school trip. Testimonies of former factory workers, now elderly, who were engaged in manufacturing poison gas, and have suffered from its aftereffects, are also included.

In his film, Mr. Kakuni seeks to pose the question: “For the generations who haven’t experienced war and don’t know the horror of manufacturing poison gas, how can they prevent such a tragedy from occurring again?” Inspired by mosaic work that Ms. Yamauchi had made which depicts images from the island’s dark past, which she had titled “Messages,” Mr. Kakuni decided to give the same title to his film. The completed film was edited from a total of about 30 hours of footage

Mr. Kakuni first visited Ohkunoshima Island in 1997. Shocked because “I was ignorant of the island’s fate although I had grown up in the neighboring prefecture,” he felt a desire to convey this history in his work one day.

After working for 12 years as a newspaper reporter, Mr. Kakuni enrolled in Waseda University’s Kawaguchi Art School three years ago and studied digital art. “Messages” is his graduation work. A former director of NHK has praised the film highly, saying he was “stunned by this little-known tragedy of war.”

Mr. Kakuni touched on his future plans with enthusiasm. “The bureaucratic system that led to war still exists,” he said. “I want to somehow make good use of the testimonies I recorded but was unable to include in this film.”