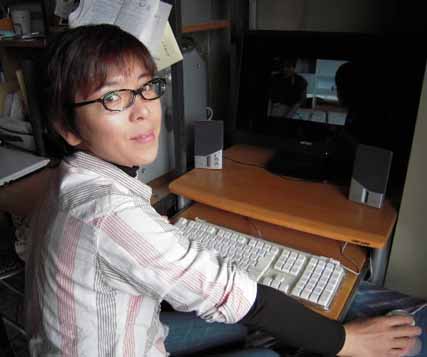 Sonomi Ito, 47, a filmmaker from Hiroshima, has made a documentary film which depicts the lives of A-bomb survivors (hibakusha) living in South Korea. She plans to hold a screening of the film at Hiroshima City Plaza for Town Development in downtown Hiroshima on February 8 at 7:00 p.m.

The 72-minute film is entitled “The Stigma of the Crazy Summer: Life for A-bomb Survivors in South Korea.” It shows how hibakusha in South Korea have been neglected by the Japanese government, in regard to relief measures, for many years. Through interviews with survivors, subtitled in Japanese, their stories of experiencing the atomic bombings of Hiroshima and Nagasaki, as well as the discrimination they suffered back in their homeland, are captured in a straightforward telling.

Ms. Ito moved to Hiroshima from Hokkaido in 2000 when her husband’s employer transferred him to western Japan. Prompted by her arrival in Hiroshima, she began to research the history of underground bunkers which Koreans had been involved in constructing during the war. She completed a documentary film on the subject in 2005 after making a number of visits to South Korea.

Since the completion of this earlier film, Ms. Ito has continued to support A-bomb survivors in South Korea through her work. The new film resulted from her wish to convey the voices of the hibakusha she has interviewed since 2002. “The reality of the suffering A-bomb survivors in South Korea have faced came as a shock to me,” said Ms. Ito. “As I have become aware of this situation, I now feel it my responsibility to continue conveying their plight.”

Admission to the screening is free. By request, Ms. Ito will lend copies of the film on DVD.