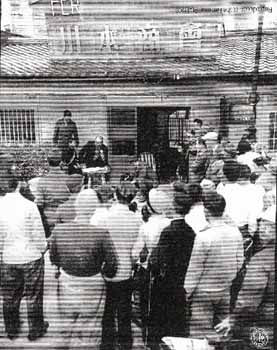 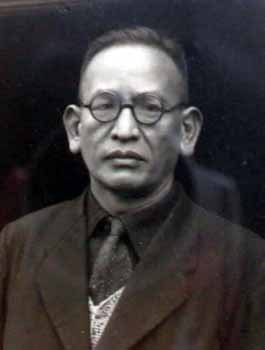 The negative of an old photograph depicting a bicycle shop that was reconstructed in the neighborhood near the hypocenter, after the whole area was flattened by the atomic bomb, has been found at the United States National Archives and Records Administration. The bicycle wholesaler, called Kawamoto Shokai, was one of the first businesses to reopen in the annihilated area of Sarugaku-cho, now part of Hiroshima’s Naka Ward. The negative is now under the care of Masaaki Tanabe, 71, owner of a film production company which is involved in a computer animation project to restore the townscape of the Sarugaku-cho neighborhood.

Kawamoto Shokai was located to the north of where the A-bomb Dome now stands and was run by Fukuichi Kawamoto (1891-1970). The building burned to the ground in the atomic bombing. Though no notation for the negative was found, the photo was believed to have been taken in late 1945. The image shows a boy being interviewed by foreign media in front of the rebuilt shop with people around them watching.

The bicycle shop also appears in a photo taken by the U.S. military in October 1945. In this picture, the one-story shop is under reconstruction and stands in the burned-out ruins of the city. According to the Hiroshima Municipal Archives, before the recent photo was located, no photos featuring the front of the shop, along with people in the image, could be traced to the reconstruction period under occupation.

Mr. Kawamoto’s fourth daughter Yoshie Nakatani, 85, said that the shop was also the residence for her parents and their seven children. In the atomic bombing, her mother and her youngest sister were killed. When Mr. Tanabe showed the photo to Ms. Nakatani, who currently lives in nearby Hatsukaichi City, she said with a smile, “Since my father moved the signboard, the door fittings, and even the roof tiles for safety in the early stages of the war, the shop could then be reconstructed. This photo brings back memories.”

Mr. Tanabe has been creating a computer animated film that shows how the people who were residing near the hypocenter at the time of the bombing really lived. During a fact-finding visit to the U.S., he uncovered the negative. “This photo shows what life was like in the days of reconstruction,” he said. “It will be helpful for the film we’re making.”

Related articles
Former neighborhood near hypocenter to be restored through computer animation (Oct. 23, 2008)
Illustrations of Hiroshima’s hypocenter surface in U.S. (Oct. 8, 2008)
Obliterated by the bombing, a neighborhood is reborn (Jan. 3, 2008)
ツイート
Return