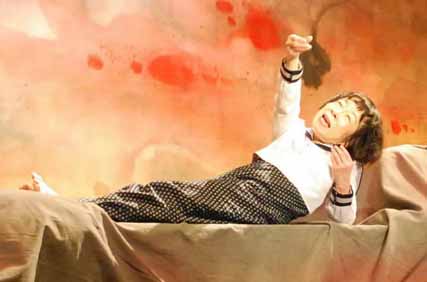 A performance portraying the life of a girl who died due to the atomic bombing was staged at Hiroshima Peace Memorial Museum on February 7-8, stirring tears from the audience. Actress Junko Hori, a resident of Tokyo, performed the one-woman show entitled “Asa-chan,” a piece she considers her lifework. The two performances on the first day drew a total of 370 people.

Ms. Hori is known as the voice of the main character of “Ninja Hattori-kun,” a popular animated television program in Japan.

The performance is based on the true story of Asako, nicknamed Asa-chan, and her family. The girl suffered severe burns in the atomic bombing of Hiroshima and passed away as a result of these injuries. Ms. Hori plays four different roles, including Asako and her mother.

Ms. Hori herself lost her father, an army doctor, in the atomic bombing. While working as a voice actress on other projects, she has been performing this one-woman show in Japan since 1989. This is the first performance she has given in Hiroshima since 2006. “I am committed to performing this piece as many times as possible to convey to people how outrageous it is for human beings to kill one another,” she said.