Peace, beyond religious boundaries, is explored in Hiroshima 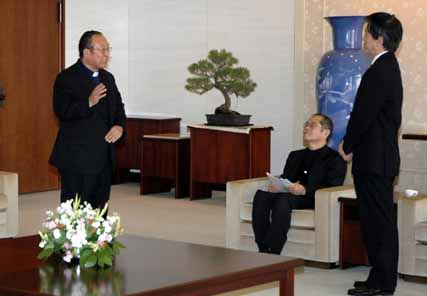 The Hiroshima-Nagasaki Conference of Religions for Peace, a gathering of religious professionals in the two A-bombed cities, was held at Hiroshima Catholic Hall in downtown Hiroshima on February 12. The participants, from such various faiths as Buddhism, Shinto, and Christianity, exchanged views on several issues, including abolishing the use of depleted uranium (DU) weapons.

Haruko Moritaki, secretary general of the NO DU Hiroshima Project, a Hiroshima-based citizens’ group, delivered a keynote speech on the damage wrought by DU weapons in Iraq and other places. The participants agreed on exploring concrete measures to abolish such weapons.

The conference is held annually in Hiroshima and Nagasaki, alternating between the two cities, and this year marked the 24th meeting. Prior to the gathering, the participants met with Hiroshima Vice Mayor Yoshihiko Miyake at City Hall and requested that the city invite U.S. President Barack Obama to Hiroshima. They also offered flowers at the Cenotaph for the A-bomb Victims.