A-bomb survivors residing in the U.S. and Brazil file lawsuit against the Japanese government 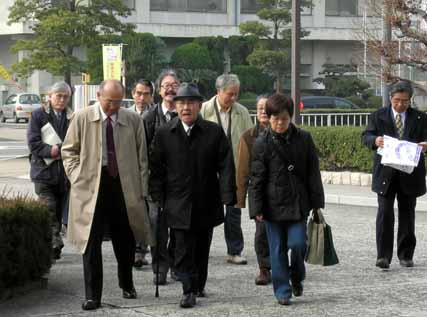 An additional 133 A-bomb survivors (hibakusha) residing in the United States and Brazil filed a class action lawsuit with the Hiroshima District Court on February 12. In the lawsuit, the plaintiffs demand that the Japanese government provide compensation for damages, contending they have borne pain and suffering due to the government’s disregard for their rights as hibakusha under the Atomic Bomb Survivors Relief Law. In one instance, their right to receive an allowance for health care was suspended on the grounds that they are not residents of Japan.

This new lawsuit follows a similar lawsuit filed in October 2008 by 163 plaintiffs. Attorneys for the additional claim have indicated that the plaintiffs include one man living in Mexico who belongs to an association of A-bomb survivors in the United States and five bereaved family members.

The plaintiffs maintain that Directive No. 402, issued by the Health and Welfare Ministry in 1974, deprived them of the ability to access relief measures, including the Health Management Allowance, as the directive stipulated that A-bomb survivors would lose their entitlements once they leave Japan. As a result, they had no choice but to give up applying for the Atomic Bomb Survivor’s Certificate and other certification that could bring allowances, leading them to “suffer tremendous emotional pain and suffering.”

At a press conference after bringing their case before the court, Atsushi Endo, president of the Committee of A-bomb Survivors in the U.S.A. and one of the plaintiffs, criticized the Japanese government, saying, “The directive caused great pain to many A-bomb survivors. If the Ministry of Health, Labor and Welfare felt sufficient understanding in this regard, we would not have needed to file the lawsuit.”

Directive No. 402 was repealed in March 2003. Previous court rulings found the directive unlawful and obligated the Japanese government to provide compensation. However, the Ministry of Health, Labor and Welfare has made the filing of lawsuits by A-bomb survivors a prerequisite for compensation.