A-bomb Dome is checked for soundness 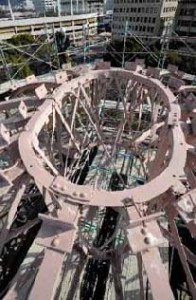 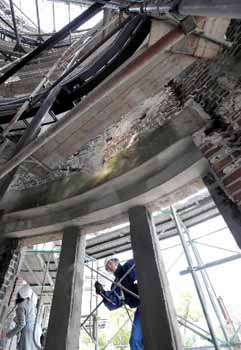 The city of Hiroshima has been conducting an inspection of the Atomic Bomb Dome, a World Heritage site, to check any deterioration from aging and other factors. On February 16, the city allowed the media to enter the site.

On the scaffold built of metal piping and planks, two engineers walked along the inner and outer walls of the Dome to examine the condition of the upper part of the building. They checked the structure for cracks, tapped the walls with hammers to determine if mortar has come loose, and performed other tests.

Soundness surveys have generally been conducted every three years since the preservation project of 1989. This is the sixth inspection following the survey conducted in 2005. The work will continue into March. So far, they have not found any major damage to the walls or a sinkage of the ground below the Dome.